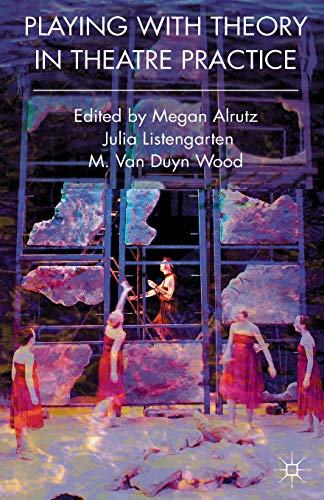 Playing with Theory in Theatre Practice
by Megan Alrutz

In Stock
$56.99
inc. GST
Through a collection of original essays and case studies, this innovative book explores theory as an accessible, although complex, tool for theatre practitioners and students.
Very Good
Only 1 left

Playing with Theory in Theatre Practice by Megan Alrutz

Through a collection of original essays and case studies, this innovative book explores theory as an accessible, although complex, tool for theatre practitioners and students. These chapters invite readers to (re)imagine theory as a site of possibility or framework that can shape theatre making, emerge from practice, and foster new ways of seeing, creating, and reflecting. Focusing on the productive tensions and issues that surround creative practice and intellectual processes, the contributing authors present central concepts and questions that frame the role of theory in the theatre. Ultimately, this diverse and exciting collection offers inspiring ideas, raises new questions, and introduces ways to build theoretically-minded, dynamic production work.

MEGAN ALTRUZis Assistant Professor at the University of Texas at Austin, USA,where she teaches in the Drama and Theatre for Youth MFA program. As a theatre scholar, as well as a community-based teaching artist, her work focuses on Applied Theatre and Digital Media with/for young people, drama-based pedagogy, and the development of new work.

JULIA LISTENGARTENis Julia Listengarten is Associate Professor and Director of Graduate Studies at the University of Central Florida. Her research interests include avant-garde theory and performance, translation theory, and nationalism. Her translation of Christmas at the Ivanovs' premiered Off-Broadway at Classic Stage Company and was included in Theater of the Avant-Garde, 1890-1950. She is the author of Russian Tragifarce: Its Cultural and Political Roots and co-editor of Theater of the Avant-Garde: 1950-2000. She has contributed to various books and theatre periodicals including Theatre Research International, Slavic and Eastern European Performance, and Scenography International.

M. VAN DUYN(Vandy)WOOD is a visual artist and theatrical designer from Central New York, USA. She is currently an Associate Professor of Design and the Coordinator of the MFA Design program for the University of Central Florida's Conservatory Theatre, USA.Vandy has been designing professionally for theatre and video since 1986 and specializes in the development of new works.

GOR009984070
Playing with Theory in Theatre Practice by Megan Alrutz
Megan Alrutz
Used - Very Good
Paperback
Macmillan Education UK
2011-11-29
328
0230577806
9780230577800
N/A
Book picture is for illustrative purposes only, actual binding, cover or edition may vary.
This is a used book - there is no escaping the fact it has been read by someone else and it will show signs of wear and previous use. Overall we expect it to be in very good condition, but if you are not entirely satisfied please get in touch with us.