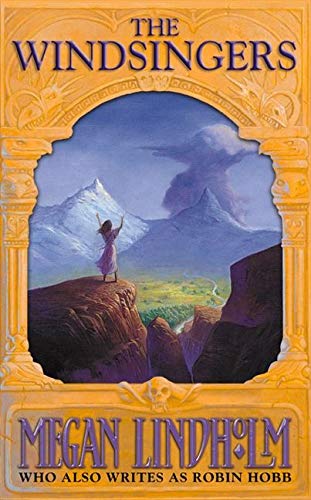 The Windsingers
by Megan Lindholm

The Windsingers (The Ki and Vandien Quartet, Book 2) by Megan Lindholm

When Ki first encountered Vandien she very nearly slit his throat. Yet later it was Vandien who suffered a terrible wound to protect her when terror fell from the skies and who gave her a reason to lay to rest the bitter memories of a once idllyic past.

Vandien's unrepentant recklessness led Ki into situations her sensible nature would have avoided. Yet it was Ki who, despite wizard-troubles of her own, risked the wrath of the Windsingers and saved Ki from his treasure hunt in the submerged temple of the storm-sung sea.

And it was Vandien's stubborn daring which allowed him to attempt to reclaim Ki from beyond the Limbreth Gate - in another world entirely!

Megan Lindholm was born in California in 1952 and majored in Communications at Denver University, Colorado. A winner of both the Hugo and Nebula Award, she wrote a number of successful fantasy novels, including Cloven Hooves, The Windsinger trilogy and Wizard of the Pigeons before taking the name, Robin Hobb. Assassin's Apprentice was Robin Hobb's first novel, and was followed by the equally successful Royal Assassin and Assassin's Quest. She lives outside Seattle, Washington.

GOR001295401
The Windsingers (The Ki and Vandien Quartet, Book 2) by Megan Lindholm
Megan Lindholm
The Ki and Vandien Quartet
Used - Very Good
Paperback
HarperCollins Publishers
2002-03-18
400
000711253X
9780007112531
N/A
Book picture is for illustrative purposes only, actual binding, cover or edition may vary.
This is a used book - there is no escaping the fact it has been read by someone else and it will show signs of wear and previous use. Overall we expect it to be in very good condition, but if you are not entirely satisfied please get in touch with us.