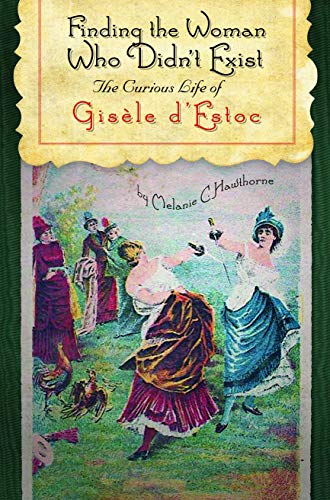 Finding the Woman Who Didn't Exist
by Melanie C. Hawthorne

Out of Stock
$58.99
inc. GST
Explores the intriguing life of the real d'Estoc, explaining why others came to doubt the "experts" and following the threads of evidence that the latter overlooked
Very Good
Only 0 left

Finding the Woman Who Didn't Exist: The Curious Life of Gisele d'Estoc by Melanie C. Hawthorne

Gisele d'Estoc was the pseudonym of a nineteenth-century French woman writer and, it turns out, artist who, among other things, was accused of being a bomb-planting anarchist, the cross-dressing lover of writer Guy de Maupassant, and the fighter of at least one duel with another woman, inspiring Bayard's famous painting on the subject. The true identity of this enigmatic woman remained unknown and was even considered fictional until recently, when Melanie C. Hawthorne resurrected d'Estoc's discarded story from the annals of forgotten history.

Finding the Woman Who Didn't Exist begins with the claim by expert literary historians of France on the eve of World War II that the woman then known only as Gisele d'Estoc was merely a hoax. More than fifty years later, Hawthorne not only proves that she did exist but also uncovers details about her fascinating life and career, along the way adding to our understanding of nineteenth-century France, literary culture, and gender identity. Hawthorne explores the intriguing life of the real d'Estoc, explaining why others came to doubt the "experts" and following the threads of evidence that the latter overlooked. In focusing on how narratives are shaped for particular audiences at particular times, Hawthorne also tells "the story of the story," which reveals how the habits of thought fostered by the humanities continue to matter beyond the halls of academe.

"Learned, funny, enlightening, and provocative in terms of what [this book] reveals not only about the past but about how we think in the present about the past and how we think about knowledge in general."-Janet Beizer, professor of Romance languages and literatures at Harvard University and author of Thinking through the Mothers: Reimagining Women's Biographies -- Janet Beizer
"A research odyssey that addresses nothing less than the importance of the humanities to education and to life."-Carol Mossman, professor of French at the University of Maryland and author of Writing with a Vengeance: The Countess de Chabrillan's Rise from Prostitution -- Carol Mossman
"A truly exquisite volume. . . . Conversational, erudite, and inspired: this book is exceptional."-Choice * Choice *
"Finding the Woman Who Didn't Exist is an enjoyable and thought-provoking read. It can appeal, on the one hand, to those interested in biographies that are also good stories. On the other, its observations of scholarship can be useful both for those who are established in the field and can even serve as a primer for those in the beginning phases of scholarship, especially when it concerns primary sources."-Richard Shryock, Contemporary French Civilization -- Richard Shryock * Contemporary French Civilization *

Melanie C. Hawthorne is a professor of French at Texas A&M University, College Station. She has authored, edited, and translated numerous works, including Rachilde and French Women's Authorship: From Decadence to Modernism (Nebraska, 2001), winner of the Modern Language Association's Scaglione Prize.

4. An Interlude (No Time in Particular)

GOR010209551
Finding the Woman Who Didn't Exist: The Curious Life of Gisele d'Estoc by Melanie C. Hawthorne
Melanie C. Hawthorne
Used - Very Good
Hardback
University of Nebraska Press
2013-03-01
216
0803240341
9780803240346
N/A
Book picture is for illustrative purposes only, actual binding, cover or edition may vary.
This is a used book - there is no escaping the fact it has been read by someone else and it will show signs of wear and previous use. Overall we expect it to be in very good condition, but if you are not entirely satisfied please get in touch with us.