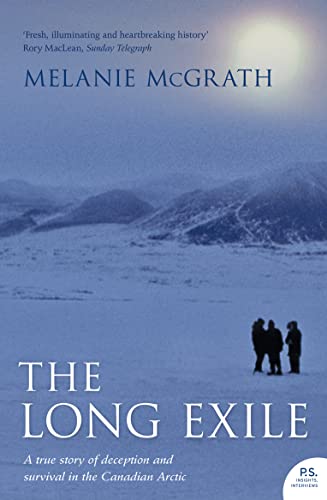 The Long Exile
by Melanie McGrath

A chilling true story of deception and survival set amidst the Inuit communities of the Canadian Arctic.

The Long Exile: A true story of deception and survival amongst the Inuit of the Canadian Arctic by Melanie McGrath

A chilling true story of deception and survival set amidst the Inuit communities of the Canadian Arctic.

In 1922 the Irish-American explorer Robert Flaherty made a film called `Nanook of the North' which captured the world's imagination. Soon afterwards, he quit the Arctic for good, leaving behind his bastard son, Joseph, to grow up Eskimo.

Thirty years later a young, inexperienced policeman, Ross Gibson, was asked by the Canadian government to draw up a list of Inuit who were to be resettled in the uninhabited polar Arctic and left to fend as best they could. Joseph Flaherty and his family were on that list. They were told they were going to an Arctic Eden of spring flowers and polar bears. But it didn't turn out that way, and this, Joseph Flaherty's story, tells how it did.

'[McGrath] offers a carefully imagined portrait of the appalling lives of the Inuit on Ellesmere Island. This is a story of official wrong-headedness and arrogance and McGrath relays it with compassion. The narrative is gripping.' Guardian

'A wealth of research underpins this harrowing tale, which is at once a lawyer's deposition and love letter to the icy world above the treeline.' Observer

`Melanie McGrath's tragic tale has an icy ring of truth that wrings the heart.' The Times

`Melanie McGrath is a gifted, passionate and sensitive story-teller and through her the authentic voice of the Arctic, not the clarion call of great white explorers, rings loud and clear. She gets right under the Inuit's seal-skin parkas; her research is meticulous, her touch is light, her understanding and invisibility are the absolute opposite of the years of foreign domination. Her play with language is disarming and original. Fresh, illuminating and heartbreaking history.' Sunday Telegraph

'Poignant and humane book. McGrath, who tracked down some of the survivors as well as traveling in the territory, tells an impressively researched and often poetic story.' Observer

`McGrath also has a wonderful feel for landscape and so the Arctic itself assumes the life of a character.The language is lovely. Modulated, lyrical and beautiful as the stark nature it describes, it makes McGrath's book more than a fascinating and instructive read. It makes it a joyful one.' Evening Standard

Melanie McGrath is the author of three previous books, `Motel Nirvana', `Hard, Soft & Wet' and `Silvertown'. She is a regular contributor for the Guardian, Independent and the Express. She lives in Vauxhall, London.

GOR002348419
The Long Exile: A true story of deception and survival amongst the Inuit of the Canadian Arctic by Melanie McGrath
Melanie McGrath
Used - Very Good
Paperback
HarperCollins Publishers
2007-10-01
288
0007157975
9780007157976
N/A
Book picture is for illustrative purposes only, actual binding, cover or edition may vary.
This is a used book - there is no escaping the fact it has been read by someone else and it will show signs of wear and previous use. Overall we expect it to be in very good condition, but if you are not entirely satisfied please get in touch with us.