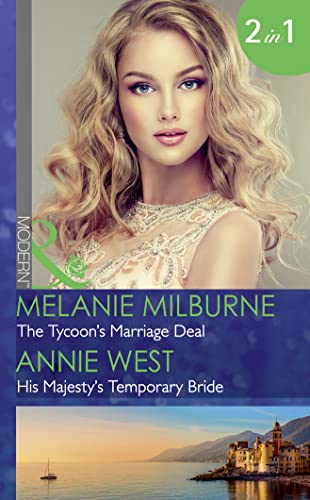 Ruthless playboy Blake McClelland dominates in the boardroom and commands in the bedroom. So when he's required to produce a fiancee in order to clinch the most important deal of his life, his solution is as cold-hearted as Blake himself - he'll choose a woman innocent enough to convince the world he's a reformed man!

After being jilted at the altar, shy bakery owner Matilda Toppington is in no hurry to wear another man's ring. Blake's cynical proposition is scandalously, shockingly outrageous - of course she should refuse! Unless Tillie dares surrender to the unknown pleasures his sinful gaze promises...

As the illegitimate secret daughter of royalty, Cat Dubois has lived a life far from luxurious. After years of bullying she's set against a return to her childhood home. But her princess half-sister has mysteriously disappeared ahead of her engagement to charismatic King Alexander.

Cat agrees to stand in for her-but she doesn't agree to the electric attraction between her and Alex! He might have no idea who she really is, but when their insatiable desire threatens to strip away every boundary between them Cat cannot hold back from the temptation of Alex's caress...

Melanie Milburne read her first Harlequin at age seventeen in between studying for her final exams. After completing a Masters Degree in Education she decided to write a novel in between settling down to do a PhD. She became so hooked on writing romance the PhD was shelved and soon after she was signed on to the London office of Harlequin Mills and Boon line, becoming the first not previously published Australian author to be contracted for the Presents line in over a decade. Annie West has devoted her life to an intensive study of tall, dark, charismatic heroes who cause the best kind of trouble in the lives of their heroines. As a sideline she's also researched dreamy locations for romance, from vibrant cities to desert encampments and fairytale castles. Annie lives with her family at beautiful Lake Macquarie. She loves to hear from readers and you can contact her at www.annie-west.com or at PO Box 1041, Warners Bay, NSW2282, Australia.

GOR008656453
The Tycoon's Marriage Deal: The Tycoon's Marriage Deal / His Majesty's Temporary Bride (The Princess Seductions) (Mills & Boon Modern) by Melanie Milburne
Melanie Milburne
Used - Very Good
Paperback
HarperCollins Publishers
2017-10-05
384
0263925412
9780263925418
N/A
Book picture is for illustrative purposes only, actual binding, cover or edition may vary.
This is a used book - there is no escaping the fact it has been read by someone else and it will show signs of wear and previous use. Overall we expect it to be in very good condition, but if you are not entirely satisfied please get in touch with us.