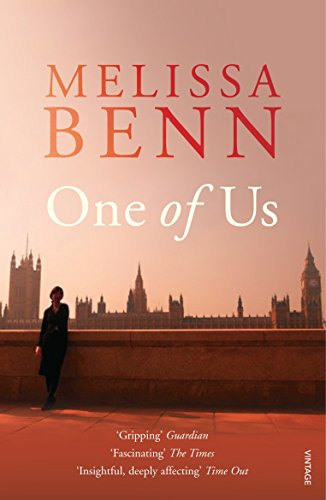 One of Us
by Melissa Benn

In Stock
$12.99
inc. GST
As the story unfolds and her marriage begins to crumble, Anna finds herself at the mercy of events, emotions and the most vicious form of blackmail.
Very Good
Only 3 left

One of Us Summary

One of Us by Melissa Benn

How would Antigone fare in a New Labour milieu? One of Us is a subtle and poignant novel about the dangerous space between private and public lives, about kingmakers and power, by a writer who should know... The narrative opens in March 2003. A leading journalist and a forty-two-year-old woman meet at a dingy London cafe in the immediate aftermath of the invasion of Iraq.Anna Adams has a story she is burning to tell, one that goes right to the top of the Cabinet. Her middle brother Jack, the black sheep of the family, has committed a shocking, violent act that the authorities have tried to cover up, and Anna is determined both to defend and celebrate him, at all costs. Anna's tale takes us on a journey to the heart of British politics and through the lives of two families, over thirty years. It charts the rise of Andy Givings, ambitious, ruthless New Labour star; of Matt Adams, Anna's elder brother and Andy's closest aide; and Christopher Mason, the charming left-leaning solicitor whom Anna marries. But it is also the story of Anna herself, loyal daughter, wife and sister. As the story unfolds and her marriage begins to crumble, Anna finds herself at the mercy of events, emotions and the most vicious form of blackmail. One of Us is a gripping story of love and betrayal, giving unparallelled insights into the conflicts that arise when vaulting ambition clashes with private values and family life

One of Us Reviews

"Melissa Benn grippingly describes struggles for love and success within powerful families - and political life. Her clear eye and telling detail slowly draws you in deeper and deeper and makes you believe in - and care about - both victors and victims." * Maggie Gee *
"Her insider's eye makes Benn's story grip like a thriller but with an added poignancy that carries the reader right to the private heart of public life." * Gillian Slovo *
"The final chapters are so gripping you won't be able to put it down" * Tatler *
"Benn is wonderful on the telling details of family life... Benn has succeeded in bringing the ancient themes of Sophocles up to date with a keen eye, a subtle intelligence, and an unwavering decency" * Guardian *
"Benn's compassionate and indignant observations on the price paid by women and children involved in a male politician's rise are fascinating - a glimpse of an enduring human tragedy" * Daily Telegraph *

Melissa Benn is a writer, journalist and campaigner, and a member of one of Britain's best known political families. She has written one previous novel, Public Lives (1995), which reviewers praised for its ' acute intelligence' and 'incredible subtlety'. Benn writes regularly for the Guardian and other national publications, and her non-fiction includes Madonna and Child: Towards a New Politics of Motherhood (1998.) She lives in north-west London with her husband and two daughters.

GOR000811704
One of Us by Melissa Benn
Melissa Benn
Used - Very Good
Paperback
Vintage Publishing
2009-01-08
288
0099507994
9780099507994
Short-listed for Galaxy British Book Awards: Waterstone's New Writer of the Year 2009
Book picture is for illustrative purposes only, actual binding, cover or edition may vary.
This is a used book - there is no escaping the fact it has been read by someone else and it will show signs of wear and previous use. Overall we expect it to be in very good condition, but if you are not entirely satisfied please get in touch with us.