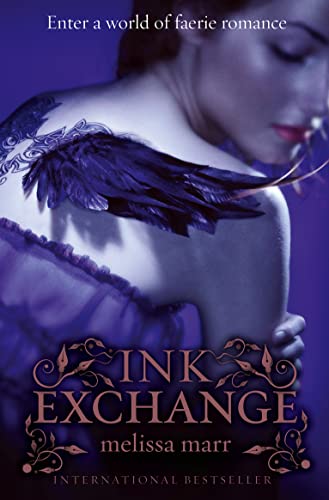 After suffering a terrible trauma at the hands of her brother's dealer friends, Leslie becomes obsessed with the idea of getting a tattoo - it's the one thing that will allow her to reclaim her body, renew her self-confidence. And when Rabbit, her local tattoo artist, shows her a secret book of his own designs, she finds one of them irresistible.

Soon, her back is adorned with a pair of mysterious eyes, framed by black wings. Leslie feels good - more than good. Nothing bad can touch her. But what she doesn't know is that her new tattoo binds her tightly to the faery whose symbol she chose: Irial, the exquisitely dangerous king of the Dark Court...

"Another highly addictive read...Compulsive enough to give the Twilight series a run for its money, and dizzyingly more sinister." -- Publishers Weekly (starred review)

Melissa Marr was voted in high school the "most likely to end up in jail". Instead, she went to graduate school, worked in a bar, became a teacher and did a lot of writing. Wicked Lovely is her first novel.

GOR001368675
Ink Exchange by Melissa Marr
Melissa Marr
Used - Very Good
Paperback
HarperCollins Publishers
2009-04-02
336
0007267177
9780007267170
N/A
Book picture is for illustrative purposes only, actual binding, cover or edition may vary.
The book has been read but remains in clean condition. All pages are intact and the cover is intact. Some minor wear to the spine.