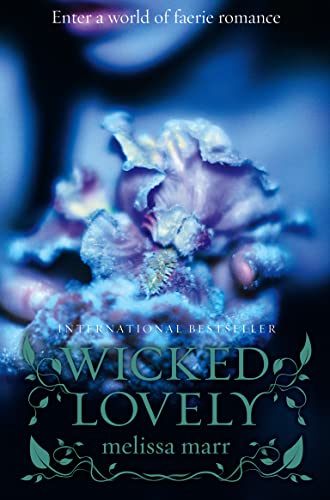 The clash of ancient rules and modern expectations swirl together in this cool, urban 21st century faery tale.

The clash of ancient rules and modern expectations swirl together in this cool, urban 21st century faery tale.

Aislinn has always seen faeries. Powerful and dangerous, they walk hidden in the mortal world, and would blind her if they knew of her Sight.

Now faeries are stalking her. One of them, Keenan, who is equal parts terrifying and alluring, is trying to talk to her, asking questions Aislinn is afraid to answer.

Rule #1: Don't ever attract their attention.

But it's too late. Keenan is the Summer King and has sought his queen for nine centuries. Without her, summer itself will perish. He is determined that Aislinn will become the Summer Queen at any cost...

Suddenly none of the rules that have kept Aislinn safe are working any more, and everything is on the line: her freedom; her best friend, Seth; her life; everything.

"Marr offers readers a fully imagined faery world that runs alongside an everyday world, which even non-fantasy (or faerie) lovers will want to delve into" Publisher's Weekly, starred review

"The fantasy of being pursued by two young men is alluring in itself, but when one is a pierced and tattooed sexy outsider and the other is a blindingly beautiful King of Faery, how much better can it get? Readers will beg for a sequel" Washington Post

"This is a magical novel... the first book in a trilogy that will guarantee to have you itching for the next instalment. * * * *" Bliss

"It is a read that pushes boundaries and is not afraid to be honest. All the things that make a great teen novel are there, including angst and romance, but in a refreshingly edgy way that may well entice a new audience to teen fiction. 'Wicked'!" From Bump to Grump

"I thought this book had a really great storyline and writing style... The alternative universe was well-explained, and the plot, though complex, was not difficult to grasp. I think anyone over 12 years old should read this book, or they would be missing out on something brilliant."
Red House Reader, aged 13

`Riveting and dark: I love this tale of a smart, tough girl who walks the razor's edge between an ancient fairy curse and her future!' Tamora Pierce

Melissa Marr was voted in high school the "most likely to end up in jail". Instead, she went to graduate school, worked in a bar, became a teacher and did a lot of writing. Wicked Lovely is her first novel.

GOR010475804
9780007263073
0007263074
Wicked Lovely by Melissa Marr
Melissa Marr
Used - Like New
Paperback
HarperCollins Publishers
2008-07-01
336
N/A
Book picture is for illustrative purposes only, actual binding, cover or edition may vary.
The book has been read, but looks new. The book cover has no visible wear, and the dust jacket is included if applicable. No missing or damaged pages, no tears, possible very minimal creasing, no underlining or highlighting of text, and no writing in the margins
Trustpilot