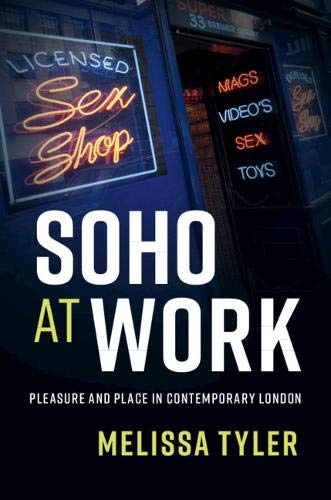 Soho at Work by Melissa Tyler (University of Essex)

An ethnographic study of working in sex shops in London's Soho, combining archival material, literary sources, photographic materials and interviews with the men and women employed there. The book draws together insights from history, geography and cultural studies to tell the unseen story of this fascinating work place.

Soho at Work: Pleasure and Place in Contemporary London by Melissa Tyler (University of Essex)

What is it like to work in a place that is both a thriving and close-knit community and a globally recognised part of the commercial sex industry? London's Soho has always been a place of complexity, contrast and change throughout its colourful history, yet urban branding, local community initiatives and licensing regulations have combined to 'clean up' Soho, arguably to the point of sanitisation, and commercial over-development remains a continuing threat. In spite of all this, Soho retains its edge and remains a unique place to live, work and consume. Based on a ten-year ethnographic study of working in Soho's sex shops, combining archival material, literary sources, photographic materials and interviews with men and women employed there, Tyler draws together insights from history, geography and cultural studies to tell the unseen story of this fascinating work place.
'There is a whole section of a bookshelf that could be dedicated to books on Soho - memoirs, photo-journals and seamy exposes, but this superbly researched achievement - Soho at Work: Pleasure and Place in Contemporary London - should take pride of place. Fascinating, sympathetic, original and enlightening from first to last.' Stephen Fry, Writer, broadcaster and founder of the 'Save Soho' campaign
'One space: so much history. One human interest: so much activity. One servicescape; so much seeking of gratification. One community; so much abjection. One scene of labouring: so much ethnographic richness. One relic: so much future. One writer: so much courage. One book: so much to learn and treasure.' Gibson Burrell, Universities of Leicester and Manchester
'It is easy enough to think that the economy happens in offices buildings and factories, brightly lit and taught in business schools. But in this delicious piece of work Melissa Tyler shows us a different economy, one in which sex, pleasure and money move in intricate ways. This is a beautifully written and well-researched book, well aware of the history and politics of sensuality and the city.' Martin Parker, Lead for the Bristol Inclusive Economy initiative, Bristol University
'In this vibrant and engaging book, Melissa Tyler draws together key literatures from cultural history, social geography and sociology to provide a rich and detailed account of contemporary Soho. Accessible, comprehensive and insightful, 'Soho at Work: Pleasure and Place in Contemporary London' tells the story of a colourful and distinctive area of the city through an in-depth analysis of historical and contemporary sources as well as through the vivid accounts of those working in the sex shop industry. A foundational book in organizational geography.' Ruth Simpson, Brunel University, London
'Soho has attracted the gaze of scholars and other writers for centuries because of a number of features that distinguish it from other parts of the vast London metropolis: cosmopolitanism; pioneering and high-class cuisine; sleaze; and, by the beginning of the 21st century, a thriving (male) gay scene. Melissa Tyler focuses her book on the third of these and approaches it as a professor of work and organisation studies, meaning that she examines how customers and staff interact in sex shops (but not other types of sex work). She also describes her interdisciplinary approach, which involves history, social science and ethnography.' Panikos Panayi, Times Higher Education
'Soho at Work takes us into a district known through a fog of myths and half-truths, a space often depicted as 'no place for a lady'. Stripping away these myths, Melissa Tyler invokes ideas from business and organisation studies to present Soho as a working community whose boundaries are shaped by shared understandings of sexuality, safety and stigma, with both female and male sex shop employees shown to perform complex emotional, aesthetic and gendered work as they deal with a daily roll call of titillated tourists, first-time purchasers and hardened regulars. Drawing on rich ethnographic data collected over more than a decade, this is an important and timely account that will surely prove essential reading for all those interested in the relations of gender, sex and the city.' Phil Hubbard, King's College London
'The result is a richly descriptive and analytically provocative book that weaves together cultural history, geography, and sociology. Some readers will likely find themselves curiously lured to Soho for a visit, like moths drawn to a (red) light.' J. R. Mitrano, Choice
Melissa Tyler is a Professor of Work and Organization Studies at the University of Essex. Her work on emotional, sexualized and aesthetic labour; gender, sexuality and the body; and on place, space and workplace setting has been published in a range of international journals, authored books and edited collections.
Introduction. Pleasure and place in Soho; 1. Soho: London's gilded gutter; 2. Putting work in its place: space, place and setting; 3. Shopping for sex: situating work in Soho's sex shops; 4. It's a dirty job: performing abject labour in Soho; 5. No place for a lady? Un/doing gender and sexuality in Soho; Conclusion. Rhythm is our business.
NGR9781316635599
9781316635599
1316635597
Soho at Work: Pleasure and Place in Contemporary London by Melissa Tyler (University of Essex)
Melissa Tyler (University of Essex)
New
Paperback
Cambridge University Press
2019-12-19
248
N/A
Book picture is for illustrative purposes only, actual binding, cover or edition may vary.
This is a new book - be the first to read this copy. With untouched pages and a perfect binding, your brand new copy is ready to be opened for the first time
Trustpilot