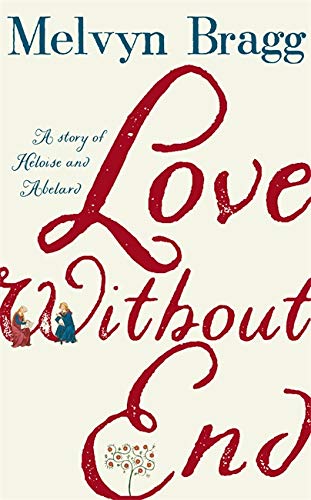 Love Without End by Melvyn Bragg

A profoundly thought-provoking, moving novel that breathes fresh life into one of history's most remarkable and enduring love stories.

Love Without End: A Story of Heloise and Abelard by Melvyn Bragg

Paris in 1117. Heloise, a brilliant young scholar, is astonished when the famous, radical philosopher, Peter Abelard, consents to be her tutor. But what starts out as a meeting of minds turns into a passionate, dangerous love affair, which incurs terrible retribution.

Nine centuries later, Arthur is in Paris to recreate the extraordinary story of Heloise and Abelard in a novel. To his surprise, his daughter visits and agrees to help, challenging his portraits of a couple who seem often inscrutable, sometimes breathtakingly modern. It soon emerges she is on her own mission to discover more about her parents' fractured relationship - and that Arthur's connection to his subject is more emotional than he cares to admit.

In this fascinating, haunting evocation of two people aflame with passion and love of learning, Melvyn Bragg dramatises the struggle to find consolation in faith -- Elizabeth Buchan * Daily Mail *
The 12th-Century love story of the brilliant scholar Heloise and radical philosopher Peter Abelard has long endured, and here Bragg recreates their tragic tale for a modern audience. It's an atmospheric, thought-provoking retelling. -- Simon Humphreys * Mail on Sunday *
What is distinctive about Bragg's approach is his emphasis on the intellectual content of the learned lovers' affair. In Pope's poem, Eloise makes just one reference to Abelard's "adored ideas". Here they are central , and so are hers. -- David Grylls * Sunday Times *
A fictionalised account of legendary star-crossed lovers unfolds in tandem with the struggles of its author . . . it all comes together in a rich tapestry of devotion. -- Hephzibah Anderson * Observer *

Bragg has mastered his sources, chiefly the letters of Abelard and Heloise and Abelard's autobiographical
Historia Calamitaturn. By the pen of Arthur the novelist, Bragg with his own flair and perceptive imagination tells their story . . . Bragg's ability to live inside the minds of these two mighty philosophical and theological intellectuals. He understands their agonies, their manipulation . . . and persecution . . . Bragg writes his version of this life-long love with ease and confidence. It is a pleasure to read; and to be reminded of Chaucer's fastidious Prioress whose shining gold brooch declares: "Amor vincit omnia."

-- Brian Martin * Spectator *
Bragg brilliantly re-imagines the legendary love story of Heloise and Abelard, uniting the Middle Ages and today in this thrilling novel. * Antonia Fraser *
Melvyn Bragg brings a fascinated attention to the moral complexities of a love story we all thought we knew, but perhaps did not understand well enough. His compassion for Abelard and Heloise makes brilliantly real and present to us their anguished journey from erotic excess towards the mystical sublime. * Rose Tremain *
A tour de force - a moving, poignant, compelling tale, wonderfully told. I have never read such true and compellingly depicted accounts of sexual desire and encounter, and Paris, both medieval and modern, comes vividly before one. * A.C. Grayling *
[Arthur's and Julia's] reflection on Heloise and Abelard's vividly drawn, complex relationship deepens how we understand its importance. As Arthur says at one stage, the goal is to rescue history from being "just another story". In Love Without End we gain access to politics and religion in another time, but also to human passions that influence us all. -- Will Smith * Cumbria Life *
[Bragg's] efforts to get inside the medieval mind-set make this more than just another historical romance about star-crossed lovers. * Church Times *
Bragg succeeds in showing how important philosophical debates about the true meaning of the Bible were in this century, and how the rivalries between philosophers became ferociously competitive. -- Shirley Whiteside * Herald (Glasgow) *
Henry James thought historical novels were 'tainted by a fatal cheapness'. Not this one. Melvyn Bragg's account of the passionate and painful love affair between the 12th century radical theologian, Peter Abelard, and the brilliant young convent-educated Eloise springs magnificently to life. No cardboard here but the smell and feel of a turbulent time and a doomed relationship, brought up close by a 21st century one. Thrilling. -- Piers Plowright * Tablet *
Melvyn Bragg is a writer and broadcaster whose first novel, For Want of a Nail, was published in 1965. His novels since include The Maid of Buttermere, The Soldier's Return, Credo and Now is the Time, which won the Parliamentary Book Award for fiction in 2016. His books have also been awarded the Time/Life Silver Pen Award, the John Llewellyn Rhys Prize and the WHSmith Literary Award, and have been longlisted three times for the Booker Prize (including the Lost Man Booker Prize). He has also written several works of non-fiction, including The Adventure of English and The Book of Books about the King James Bible. He lives in London and Cumbria.
GOR011243236
Love Without End: A Story of Heloise and Abelard by Melvyn Bragg
Melvyn Bragg
Used - Like New
Hardback
Hodder & Stoughton
2019-03-07
320
1473690927
9781473690929
N/A
Book picture is for illustrative purposes only, actual binding, cover or edition may vary.
The book has been read, but looks new. The book cover has no visible wear, and the dust jacket is included if applicable. No missing or damaged pages, no tears, possible very minimal creasing, no underlining or highlighting of text, and no writing in the margins
Trustpilot