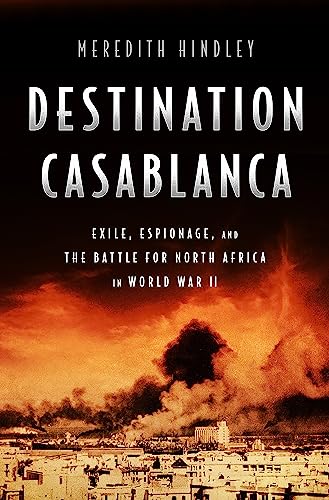 This rollicking and panoramic history of Casablanca during the Second World War sheds light on the city as a key hub for European and American powers, and a place where spies, soldiers, and political agents exchanged secrets and vied for control.

In the summer of 1940, following France's surrender to Germany, Casablanca was transformed from an exotic travel destination to a key military target. Nazi agents and collaborators soon overran the city looking to capitalize on the new Vichy regime. The resistance was not far behind, as bartenders, shopkeepers, taxi drivers, celebrities, and disgruntled bureaucrats formed a network of Allied spies. Meanwhile, Jewish refugees from Europe flooded the city, hoping to obtain visas to the United States and beyond.

In November 1942, Casablanca's wartime fate changed in 74 hours, when 33,000 American soldiers stormed the beaches of French Morocco as part of Operation TORCH. In Allied hands, Casablanca's port became a crucial logistical hub in British and American plans to return to Europe and defeat Germany. Two months later, Roosevelt and Churchill traveled to Casablanca to plot the next phase of war and achieve Germany's "unconditional surrender."

Rife with rogue soldiers, power grabs, plot twists, and diplomatic intrigue, Destination Casablanca is the riveting and untold history of this glamorous and beloved city - memorialized in the classic film - at the heart of World War II.

Meredith Hindley is a historian and senior writer for Humanities, the quarterly review of the National Endowment for the Humanities. Her work has also appeared in the New York Times, Salon, Christian Science Monitor, and Barnes and Noble Review. Hindley received her PhD from American University.
GOR011133566
9781610394055
1610394054
Destination Casablanca: Exile, Espionage, and the Battle for North Africa in World War II by Meredith Hindley
Meredith Hindley
Used - Very Good
Hardback
PublicAffairs,U.S.
2017-10-26
464
N/A
Book picture is for illustrative purposes only, actual binding, cover or edition may vary.
This is a used book - there is no escaping the fact it has been read by someone else and it will show signs of wear and previous use. Overall we expect it to be in very good condition, but if you are not entirely satisfied please get in touch with us
Trustpilot