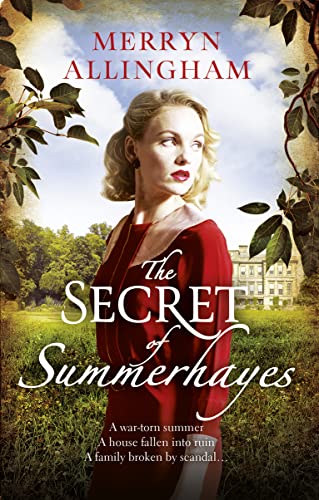 The Secret of Summerhayes
by Merryn Allingham

A house fallen into ruin

A family broken apart by scandal...

The Secret of Summerhayes Summary

The Secret of Summerhayes by Merryn Allingham

A house fallen into ruin

A family broken apart by scandal...

Summer 1944: Bombed out by the blitz, Bethany Merston takes up a post as companion to elderly Alice Summer, last remaining inhabitant of the dilapidated and crumbling Summerhayes estate. Now a shadow of its former glory; most of the rooms have been shut up, the garden is overgrown and the whole place feels as unwelcoming as the family themselves.

Struggling with the realities of war, Alice is plagued by anonymous letters and haunting visions of her old household. At first, Beth tries to convince her it's all in her mind but soon starts to unravel the mysteries surrounding the aristocratic family's past.

An evocative and captivating tale, The Secret of Summerhayes tells of dark secrets, almost-forgotten scandals and a household teetering on the edge of ruin.

Customer Reviews - The Secret of Summerhayes

Merryn Allingham was born into an army family and spent her childhood moving around the UK and abroad. Unsurprisingly it gave her itchy feet and in her twenties she escaped from an unloved secretarial career to work as cabin crew and see the world. Merryn loves history and in 2014 published her first historical suspense trilogy, Daisy's War, set in India and wartime England in the 1930s/1940s. All three novels are now available - The Girl from Cobb Street, The Nurse's War and Daisy's Long Road Home.

GOR008579494
The Secret of Summerhayes by Merryn Allingham
Merryn Allingham
Used - Very Good
Paperback
HarperCollins Publishers
2017-07-27
350
0008193851
9780008193850
N/A
Book picture is for illustrative purposes only, actual binding, cover or edition may vary.
This is a used book - there is no escaping the fact it has been read by someone else and it will show signs of wear and previous use. Overall we expect it to be in very good condition, but if you are not entirely satisfied please get in touch with us.