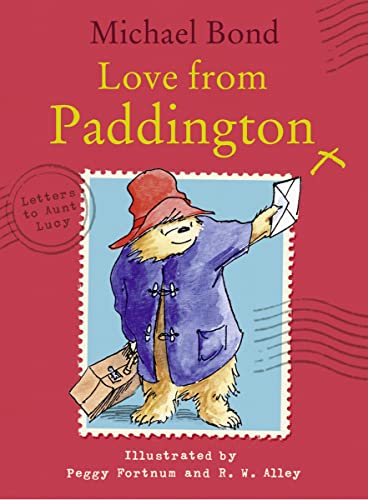 Love from Paddington
by Michael Bond

Love from Paddington by Michael Bond

Dear Aunt Lucy,
I expect this will come as a great surprise to you, but not only have I arrived in England, but I have an address! I'm staying at number 32 Windsor Gardens and it isn't at all like the Home for Retired Bears...`

This delightfully engaging series of letters from Paddington to his Aunt Lucy in Peru, follows his new experiences in London while showcasing his uniquely charming and hilarious take on the world. From stowing away on a ship, to working as a barber, there is certainly never a dull moment!

`...a jolly ride through the best of the Paddington tales' The Times

`I've always had great respect for Paddington...He is a British institution.' Stephen Fry

`Paddington has joined Pooh as one of the great bears of English children's literature.' The Teacher

`Michael Bond's accident-prone bear...has become one of the most enduring of children's characters.' The Bookseller

GOR007156593
Love from Paddington by Michael Bond
Michael Bond
Used - Very Good
Paperback
HarperCollins Publishers
2015-10-08
144
0008135355
9780008135355
N/A
Book picture is for illustrative purposes only, actual binding, cover or edition may vary.
This is a used book - there is no escaping the fact it has been read by someone else and it will show signs of wear and previous use. Overall we expect it to be in very good condition, but if you are not entirely satisfied please get in touch with us.