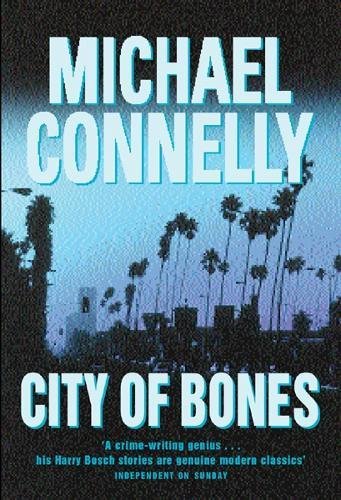 City Of Bones
by Michael Connelly

City Of Bones by Michael Connelly

When the bones of a twelve-year-old boy are found scattered in the Hollywood Hills, Harry Bosch is drawn into a case that brings up the darkest memories from his own haunted past. The bones have been buried for years, but the cold case doesn't deter Bosch. Unearthing hidden stories, he finds out the child's identity and reconstructs his fractured life, determined that he not be forgotten.

At the same time, a new love affair with a female cop begins to blossom for Bosch - until a stunningly blown mission leaves him in more trouble than ever before in his turbulent career. The investigation races to a shocking conclusion and leaves Bosch on the brink of an unimaginable decision.

Give a dog a bone and a whole can of worms opens up. This is the start of the 7th great Detective Harry Bosch novel, set in LA but far from the glitz and glamour of Hollywood. When a dog returns to its master with a humerus in its mouth it opens up a horrific case of child abuse from twenty years previously. For the next two weeks Bosch and his partner try to bring closure and after identifying the skeleton the answer seems simple. Too simple... Digging back into the neighbourhood's past unearths secrets that could and do destroy lives and careers, bringing back memories for Bosch that he would rather forget. Award-winning crime writer Michael Connelly carries the plot back and forth, intertwining it with Bosch's bolshiness in the face of authority. Love interest arises only to confound both the case and Bosch with the complexity of its relationship. A page-turning, fast-moving pacy crime story - forget about doing anything else till the last page is turned and Bosch reaches a crossroads in his life. - Lucy Watson

A former police reporter for the LOS ANGELES TIMES, Michael Connelly is the author of the Harry Bosch thriller series as well as several stand-alone bestsellers, including the highly acclaimed legal thriller, THE LINCOLN LAWYER, selected for the Richard & Judy Book Club. Michael Connelly has been President of the Mystery Writers of America. His books have been translated into 31 languages and have won awards all over the world, including the EDGAR and ANTHONY AWARDs. He lives in Tampa, Florida, with his family.

GOR001291553
City Of Bones by Michael Connelly
Michael Connelly
Harry Bosch Series
Used - Very Good
Hardback
Orion Publishing Co
2002-04-08
400
0752821407
9780752821405
Winner of Anthony Award for Best Paperback Original 2003 (UK)
Book picture is for illustrative purposes only, actual binding, cover or edition may vary.
This is a used book - there is no escaping the fact it has been read by someone else and it will show signs of wear and previous use. Overall we expect it to be in very good condition, but if you are not entirely satisfied please get in touch with us.