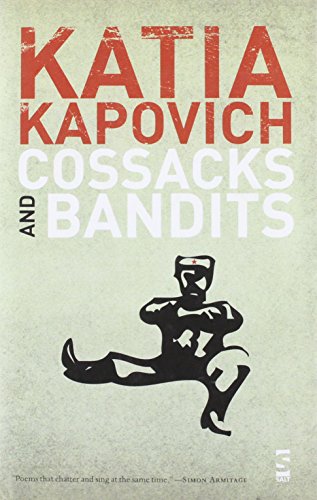 Cossacks and Bandits
by Katia Kapovich

Set in the West, Russia, Moldova and the Middle East, Katia Kapovich's Cossacks and Bandits explores the personal histories of survivors of sociopolitical and economic distress, who are the true modern hero and heroine. In the final reckoning, survival and dignity depend on creative thinking and a leap of the imagination.

Cossacks and Bandits by Katia Kapovich

The modern world is a crucible of risks and pressures. Katia Kapovich's new poetry collection, Cossacks and Bandits, addresses a coherent range of cultural, aesthetic, psychological, philosophical, social and political issues relevant to the complexities of modern life. How does one survive war, terror, loss, injustice, trauma, displacement, marginalization and other hurtful experiences without embracing cynicism or indifference? What resources of strength must we rely on in a society that is ideologically and economically fluid and at times cynical and indifferent, where mass culture, institutional religion and national belonging have only weak and doubtful remedies to offer? The book focuses on the personal histories of men and women who are survivors of sociopolitical and economic distress. To Kapovich such individuals are the true modern hero and heroine. They show that at the limits of experience, survival and dignity depend on creative thinking, on a leap of imagination, as in the Russian children's game of Cossacks and bandits. Set in the US, Eastern Europe and the Middle East - regions that the poet knows intimately, having spent a considerable part of her life in each - this volume is a poetic survival guide to cultural and geographical displacement, alienation and marginality. With feeling and mastery, with sadness and humor, Kapovich fuses a diverse polyphony of voices and themes into original, full-blooded, lyric American verse of great general and literary interest.

Katia Kapovich possesses one of the freshest, most arresting poetic voices I have heard in a long time. She can sway effortlessly from the most common detail into zones of sheer imaginative wonder. That she offers a rare view of a poet's daily life in Soviet Russia only adds to the broader significance of her writing. Gogol in Rome is a powerful gathering of her best work in English.

Katia Kapovich's indelible vignettes introduce us to the eerily desolate landscapes of the post-Glasnost Soviet Union, often through the filter of that dream-like, transitional consciousness peculiar to the recent emigre to America. Her poetry is singularly vivid, poignant, and manages to capture in miniature what Babel and Chekov achieve in their finest tales.

Katia Kapovich is a bilingual poet writing in English and Russian. She is the author of five collections of Russian verse and of a book of English language poetry, Gogol in Rome (Salt, 2004), shortlisted for the Jerwood Alderburgh Prize 2005 in England. Her English poems have also appeared in the London Review of Books, The New Republic, The Independent, Harvard Review, Ploughshares, The American Scholar, The Antioch Review, Jacket, and numerous other periodicals. She received the 2001 Witter Bynner Fellowship from the US Library of Congress. In 2007 she will be Poet-in-Residence at Amherst College. Kapovich lives in Cambridge, MA, where she co-edits Fulcrum: an annual of poetry and aesthetics.

The Girl That Saved a Village

The Hardest Money I Made

The Airport is Another Country

The Race We Lost

The Happiest Money I Made

To Catch a Hedgehog

The Birth of Comedy out of the Spirit of Gossip

A Movie Star over Drinks Upstairs at the Pudding

A Portrait of a Dog as an Older Guy

A Cup of Coffee on the Romanian Border

A Treatise on Boredom

Sticking to the Truth

"Mother, I can still touch those winters..."

To Whom It May Concern

A Fight on My Hands

Confession of an Urbanist

A Kind of Normal Life

GOR002925631
Cossacks and Bandits by Katia Kapovich
Katia Kapovich
Salt Modern Poets
Used - Very Good
Hardback
Salt Publishing
2008-02-15
96
1844714470
9781844714476
N/A
Book picture is for illustrative purposes only, actual binding, cover or edition may vary.
This is a used book - there is no escaping the fact it has been read by someone else and it will show signs of wear and previous use. Overall we expect it to be in very good condition, but if you are not entirely satisfied please get in touch with us.