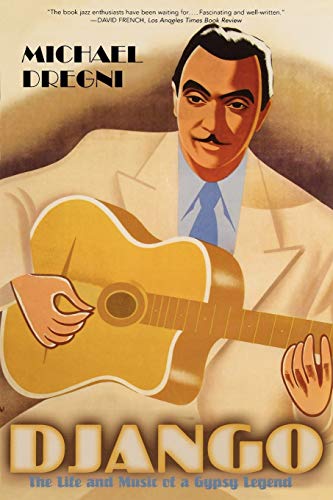 Used Price
$33.99
inc. GST
Free Shipping in Australia
Django Reinhardt was arguably the greatest guitarist who ever lived, an important influence on Les Paul, Charlie Christian, B B King, Jerry Garcia, Chet Atkins, and many others. Capturing the extraordinary life and times of one of the great musicians of the twentieth century, this work offers a portrait of this great guitarist.
Very Good

Django: The Life and Music of a Gypsy Legend by Michael Dregni

Django Reinhardt was arguably the greatest guitarist who ever lived, an important influence on Les Paul, Charlie Christian, B.B. King, Jerry Garcia, Chet Atkins, and many others. Yet there is no major biography of Reinhardt. Now, in Django, Michael Dregni offers a definitive portrait of this great guitarist. Handsome, charismatic, childlike, and unpredictable, Reinhardt was a character out of a picaresque novel. Born in a gypsy caravan at a crossroads in Belgium, he was almost killed in a freak fire that burned half of his body and left his left hand twisted into a claw. But with this maimed left hand flying over the frets and his right hand plucking at dizzying speed, Django became Europe's most famous jazz musician, commanding exorbitant fees-and spending the money as fast as he made it. Dregni not only chronicles this remarkably colorful life-including a fascinating account of gypsy culture-but he also sheds much light on Django's musicianship. He examines his long musical partnership with violinist Stephane Grappelli-the one suave and smooth, the other sharper and more dissonant-and he traces the evolution of their novel string jazz ensemble, Quintette du Hot Club de France. Indeed, the author spotlights Django's amazing musical diversity, describing his swing-styled Nouveau Quintette, his big band Django's Music, and his later bebop ensemble, as well as his many compositions, including symphonic pieces influenced by Ravel and Debussy and his unfinished organ mass inspired by Bach. And along the way, the author offers vivid snapshots of the jazz scene in Paris-colorful portraits of Josephine Baker, Bricktop, Louis Armstrong, Coleman Hawkins, and countless others-and of Django's vagabond wanderings around France, Europe, and the United States, where he toured with Duke Ellington. Capturing the extraordinary life and times of one of the great musicians of the twentieth century, Django is a must-read portrait of a true original.

"One of the most satisfying jazz biographies in recent years.... Dregni writes lyrically of a place where the crosscurrents of art, music and fashion collided to produce a cultural richness that happens only once or twice a century, if humans are lucky.... Rich and rewarding."-Baltimore Sun
"Extremely informative.... An important appreciation of an oft-forgotten musician.... Dregni carefully dissects Reinhardt's virtuoso playing style without resorting to technical jargon, and he spends plenty of time tending to Reinhardt's passionate soul-artistic, gypsy and otherwise."-Mitch Myers, DownBeat
"A rags-to-riches story of a unique talent whose works continue to touch aspiring guitarists of all genres."-Library Journal (starred review)
"A compelling portrait of this colorful musician, one that gives equal time to Reinhardt's fascinating story as well as ample musical analysis."-JazzTimes
"An encyclopedic account of the Gypsy jazzman's life and times that provides an abundance of new information, finds new connections between what was already known, and clears up many misconceptions along the way."-Guitar Player
"In many ways the book jazz enthusiasts have been waiting for.... Fascinating and well-written. Dregni's musical analysis will send fans running to the stereo, digging out the old recordings and listening with fresh ears. Guitarists will have a feast reading about Django's technique and his famous Selmer Maccaferri guitar. Although Django will always be a larger-than-life figure, Dregni has given us a much clearer picture of the man behind the myth. 'Django' is, for now, the definitive biography, and we are in Dregni's debt for considerably advancing our understanding of the remarkable Django Reinhardt, his music and the world he lived in."-David French, Los Angeles Times Book Review
"Dregni's biography does his complex subject justice.... His immersion in the period's history enriches his storytelling and our understanding. The panoramic results present Django Reinhardt as he has never been seen.... Dregni clarifies a lot of history while weaving an illuminated web of contexts around his subject. He vividly describes Gypsy life and mores, and anti-Gypsy bigotry; unearths new aspects of Reinhardt's life and work; discusses Parisian musette, American 'hot' jazz and bebop, and classical music; and insightfully details the music Reinhardt made and the instruments and people he made it with."-Gene Santoro, The New York Times Book Review
"There was only one Django Reinhardt, and Dregni supplies a vivid, detailed portrait of the man behind the guitar.... Dregni has given us Reinhardt the man-rascal, scoundrel, transcendent improviser, failed human being."-Joel Selvin, San Francisco Chronicle
"The great strength of his book is his tireless research into the world of Django's gypsy roots. He has tracked down and interviewed as many of Reinhardt's relatives as he can find, as well as older gypsies who knew and worked with him. The result is a more complete portrait of Reinhardt's inner life, including his relationships with his parents, his wife and many other women, and two sons. There is even a detailed account of the tragic fire that cost him two fingers.... Django is a remarkable book, and its outsider's perspective is part of the reason."-New York Sun
"In this carefully researched biography, rich with details from interviews with family members, friends and musicians, Dregni brings legendary Gypsy jazz guitarist Django Reinhardt into the spotlight.... Dregni casts Django as a mercurial, charismatic Romany innocent, alternately transfixed by dajo life and dismissive of it. Colorful descriptions of the nightclubs of jazz-age Paris and sensitive appraisals of Django's musicianship add to the book's appeal."-Publishers Weekly
"The book is alive from beginning to end, and after awhile you feel like you were there as Django's career unfolds. Dregni insures that the story behind the music will not fade. Musicians, guitarists, students of the history of WWII, and those who love a good biography will love this book."-Frank Forte, Just Jazz Guitar
"Dregni...not only has managed to break into the French milieu of jazz aficionados and sects in which Django worked but has penetrated the Gypsy, or Romany, world from which Django emerged-a clannish world whose existence, well into the nineteen-fifties and sixties, was still largely furtive, outdoors, vagabond, and, occasionally, criminal. Dregni clears up the two much mystified areas of Django's life-what exactly he did during the Second World War, and what really happened on his one trip to America, in 1946-and he sorts through the music and, nice bonus, manages to suggest plots for at least three fine French movie musicals."-Adam Gopnik, The New Yorker
"Uncovers the influences that helped fuse Reinhardt's unique talent and background with a developing music scene that would eventually become a lasting art form."-Vintage Guitar Magazine

Michael Dregni is a writer for Vintage Guitar magazine; his work has also appeared in , , and The Utne Reader, among other publications. He lives in Minneapolis, Minnesota.

GOR003203934
Django: The Life and Music of a Gypsy Legend by Michael Dregni
Michael Dregni
Used - Very Good
Paperback
Oxford University Press Inc
2006-07-13
344
0195304489
9780195304480
Winner of Named One of the Best Books of 2004 by San Francisco Chronicle Named a Finalist for Book of the Year by Foreword Magazine.
Book picture is for illustrative purposes only, actual binding, cover or edition may vary.
This is a used book - there is no escaping the fact it has been read by someone else and it will show signs of wear and previous use. Overall we expect it to be in very good condition, but if you are not entirely satisfied please get in touch with us.