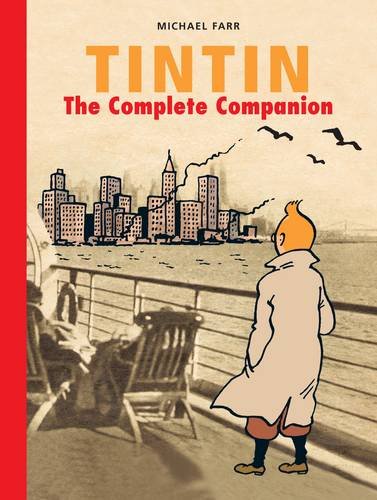 Used Price
$51.99
inc. GST
Free Shipping in Australia
This complete guide to the world of Tintin, lavishly illustrated with photographs, illustrations, sketches and maps is the perfect gift for any Tintin fan.
Reviews:
Trustpilot
Like New

Join the world's most famous travelling reporter in the complete guide to the world of Tintin.The perfect gift for fans of the beloved graphic novel series, old and new.

Written by ace Tintinologist Michael Farr, this book is the complete guide to The Adventures of Tintin, including fascinating background information on how the books were created. Learn how Tintin was based on Herge's brothe, and Captain Haddock on himself! With fascinating detail Michael Farr also recounts how real people came to be immortalised in the Tintin books.

Lavishly illustrated with photographs, illustrations, sketches and maps, this is the fascinating story of the evolution of a genuine comic book classic. Ideal for fans aged 8 and up.

Herge (Georges Remi) was born in Brussels in 1907. Over the course of 54 years he completed over 20 titles in The Adventures of Tintin series, which is now considered to be one of the greatest, if not the greatest, comics series of all time.

Have you collected all 24 graphic novel adventures?

Tintin in the Land of the Soviets

Tintin in the Congo

Tintin: Cigars of the Pharaoh

Tintin: The Crab with the Golden Claws

Tintin: The Secret of the Unicorn

Tintin: Prisoners of the Sun

Tintin: Explorers of the Moon

The Adventures of Tintin and the Picaros

."..an excellent introduction.... Accessible and engaging..." -- The School Library Journal (on Farr's Adventures of Herge)
.".. stunning collection of artifacts, including pre-Tintin drawings, Tintin sketches, newspaper clippings, magazine and book covers." -- The New York Times (on Farr's Adventures of Herge)
.".. a delightful introduction to the world of Tintin, providing extended profiles of the series' colorful cast of recurring characters while exploring Herg 's sources for each of them." -- Publishers Weekly (on Farr's Tintin & Co.)

Herge (Georges Remi) was born in Brussels in 1907. Over the course of 54 years he completed 23 albums of The Adventures of Tintin series, which is now considered to be one of the greatest, if not the greatest, comics series of all time. With translations published in over 80 languages, more than 230 million copies sold worldwide and a Hollywood movie to its name, Tintin dominates the Comics and Graphic Novels chart even today. Sadly, Herge died in 1983, leaving his 24th album, Tintin and Alph-Art, unfinished, but his hero continues to be one of the most iconic characters in both adult and children's fiction.

GOR011135080
Tintin: The Complete Companion: The Complete Guide to Tintin's World by Michael Farr
Michael Farr
The Adventures of Tintin
Used - Like New
Hardback
Egmont UK Ltd
2011-10-03
128
1405261277
9781405261272
N/A
Book picture is for illustrative purposes only, actual binding, cover or edition may vary.
The book has been read, but looks new. The book cover has no visible wear, and the dust jacket is included if applicable. No missing or damaged pages, no tears, possible very minimal creasing, no underlining or highlighting of text, and no writing in the margins.