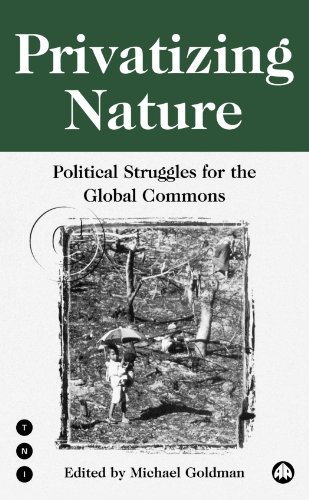 Used Price
$46.99
inc. GST
Free Shipping in Australia
An examination of the many controversial appropriations of nature by private concerns, from the rain forests to the gene pool.
Reviews:
Trustpilot
Very Good

`An easily read book illuminating the multifarious process of environmental degradation, as well as the motley social movements, especially on a grass-root level, resisting the privatisation of common resources and ecological degradation on both a local and global level.' Capital & Class

Tackling the key themes - such as the convergence of environment and social justice, global commodities, and the role of social movements - the contributors draw on examples from the Amazon, Mexico, Cameroon, India and the industrialised North.

Michael Goldman is MacArthur Fellow of Peace and International Cooperation at the University of California at Berkeley.

GOR004852039
Privatizing Nature: Political Struggles For the Global Commons by Michael Goldman
Michael Goldman
Transnational Institute
Used - Very Good
Paperback
Pluto Press
1998-04-14
288
0745313051
9780745313054
N/A
Book picture is for illustrative purposes only, actual binding, cover or edition may vary.
This is a used book - there is no escaping the fact it has been read by someone else and it will show signs of wear and previous use. Overall we expect it to be in very good condition, but if you are not entirely satisfied please get in touch with us.