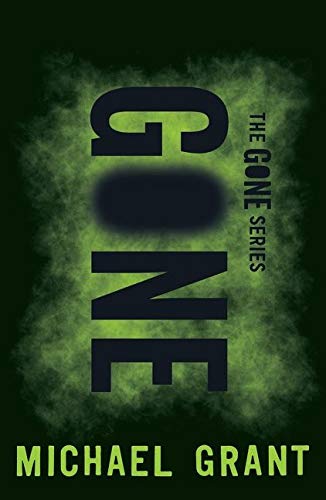 Michael Grant has lived an exciting, fast-paced life. Michael is a World Book Day author for 2017.

Welcome to the FAYZ! This is Book 1 in the series that Stephen King calls a `driving, torrential narrative'. In the blink of an eye all the adults disappear in a small town in southern California and no one knows why. Cut off from the outside world, those that are left are trapped, and there's no help on the way. Sam Temple and his friends must do all they can to survive. Chaos rules the streets. Gangs begin to form. Sides are chosen - strong or weak. Cruel or humane. And then there are those who begin to develop powers . . . The GONE series is Lord of the Flies for the 21st century. In turns breathtaking, harrowing, and utterly terrifying. Its complex characters and moral dilemmas will delight fans of The Hunger Games, Divergent and The Maze Runner. This is dystopian fiction at its best. Have you got all 6 titles in the New York Times bestselling saga: Gone, Hunger, Lies, Plague, Fear, and Light? `I am now free to leave the FAYZ, but my time there was well spent' Stephen King If you love GONE, be sure not to miss Michael's new series Front Lines - it's WWII but not as you know it! The first book is Front Lines, followed by Silver Stars. Michael Grant also has a World Book Day book, Dead of Night, which is set in the Front Lines universe and written exclusively for World Book Day 2017. Michael Grant has lived an exciting, fast-paced life. He moved in with his wife Katherine Applegate after only 24 hours. He has co-authored over 160 books but promises that everything he writes is like nothing you've ever read before! If the Gone series has left you hungry for more from the dark genius of YA fiction, look out for the BZRK trilogy: BZRK, BZRK Reloaded, BZRK Apocalypse and the terrifying Messenger of Fear and its sequel The Tattooed Heart. Michael is a World Book Day author for 2017.

Michael Grant is the evil genius of Young Adult Fiction. Among his biggest fans is Stephen King who called the GONE series `A driving, torrential narrative'. Michael has now written around 150 books (with Katherine, as himself, under pseudonyms and as a ghostwriter). He now lives in the San Francisco Bay area taking his inspiration from his charming view of Alcatraz. From across those dark waters have emerged his dystopian fantasy series, GONE, his thrilling futuristic trilogy BZRK, and the menacing Messenger of Fear. As well as reinventing history with his Front Lines series, and revisiting the world of GONE with MONSTER and VILLAIN.

GOR008242960
Gone by Michael Grant
Michael Grant
The Gone Series
Used - Like New
Paperback
Egmont UK Ltd
2015-05-07
576
1405277041
9781405277044
N/A
Book picture is for illustrative purposes only, actual binding, cover or edition may vary.
The book has been read, but looks new. The book cover has no visible wear, and the dust jacket is included if applicable. No missing or damaged pages, no tears, possible very minimal creasing, no underlining or highlighting of text, and no writing in the margins.