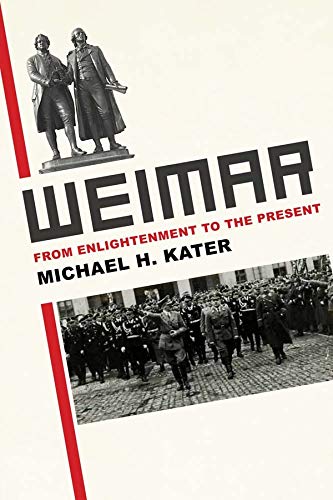 Out of Stock
$27.99
inc. GST
Weimar was a centre of the arts during the Enlightenment. This book offers a complete history of Weimar, from its meteoric eighteenth-century rise from obscurity through its glory days of unbridled creative expression to its dark descent back into artistic insignificance under Nazi rule and, later, Soviet occupation and beyond.
Very Good
Only 0 left

Weimar: From Enlightenment to the Present by Michael H. Kater

Historian Michael H. Kater chronicles the rise and fall of one of Germany's most iconic cities in this fascinating and surprisingly provocative history of Weimar. Weimar was a center of the arts during the Enlightenment and hence the cradle of German culture in modern times. Goethe and Schiller made their reputations here, as did Franz Liszt and the young Richard Strauss. In the early twentieth century, the Bauhaus school was founded in Weimar. But from the 1880s on, the city also nurtured a powerful right-wing reactionary movement, and fifty years later, a repressive National Socialist regime dimmed Weimar's creative lights, transforming the onetime artists' utopia into the capital of its first Nazified province and constructing the Buchenwald death camp on its doorstep.

Kater's richly detailed volume offers the first complete history of Weimar in any language, from its meteoric eighteenth-century rise up from obscurity through its glory days of unbridled creative expression to its dark descent back into artistic insignificance under Nazi rule and, later, Soviet occupation and beyond.

`Kater has written a fascinating account of this extraordinary city. It is highly readable, capable of great wryness and, considering the cultural and political ground it covers, mostly very convincing.'-Philip Hensher, The Spectator -- Philip Hensher * The Spectator *
`Kater makes a convincing case that myth and reality don't quite add up in Weimar - that for much of its history the town was fusty and reactionary.'-Marcus Tanner, The Independent -- Marcus Tanner * The Independent *
`Political shadows, which hung heavily over Weimar for much of the 20th century, naturally permeate Michael Kater's thorough and thoughtful account of its history.'-Roger Morgan, THES -- Roger Morgan * THES *
'Michael Kater has written a vivid account of the evolution of a German town that is also a powerful symbol of German culture: of the heights but also the depths. The result is that this is not just a history of Weimar, it is a profoundly insightful examination of the dilemmas of Germans in the face of their heritage.' - Harold James, author of Europe Reborn: A History, 1914-2000 -- Harold James
`From Mr. Kater we get an intricate account of its atrocities and of the close integration - administrative, commercial, financial- of camp and town. Here as elsewhere, the author draws on the full range of scholarly research, going into immense, even excessive detail.'-T.J. Reed, Wall Street Journal Europe.
-- T.J. Reed * Wall Street Journal European Edition *
`Kater's breadth of knowledge must come from a life-time's studying, and readers interested in any aspect of the Weimar legacy will come away from his book with new nuggets of information.'-Julian Preece, Times Literary Supplement.
-- Julian Preece * TLS *

Michael H. Kater is Distinguished Research Professor of History Emeritus at York University, Toronto, and a Fellow of the Royal Society of Canada. He is the author of Hitler Youth.

GOR007225232
Weimar: From Enlightenment to the Present by Michael H. Kater
Michael H. Kater
Used - Very Good
Hardback
Yale University Press
2014-08-01
480
0300170564
9780300170566
N/A
Book picture is for illustrative purposes only, actual binding, cover or edition may vary.
This is a used book - there is no escaping the fact it has been read by someone else and it will show signs of wear and previous use. Overall we expect it to be in very good condition, but if you are not entirely satisfied please get in touch with us.