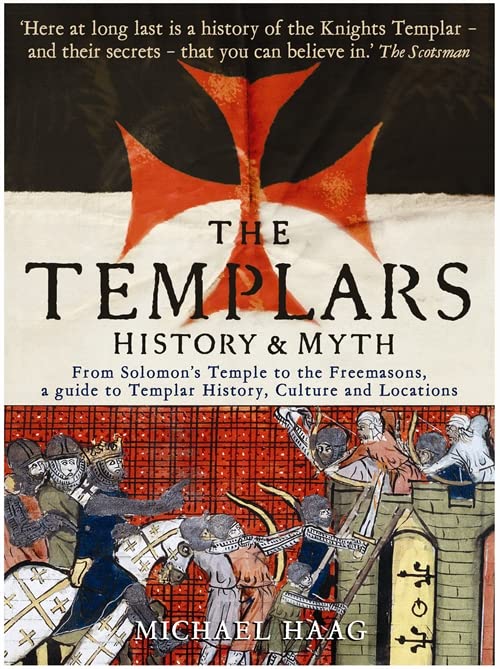 In Stock
$14.49
inc. GST
Investigates the Templar legends and legacy - from the mysteries of Solomon's Temple in Jerusalem through to Templar appearances in Dan Brown and Indiana Jones. This book explains the context of Templar history, including the evidence discovered by the Vatican that the Templars were not guilty of heresy.
Like New Very Good Good Well Read
Only 3 left

Templars: History and Myth: From Solomon's Temple to the Freemasons by Michael Haag

An order of warrior monks founded to protect pilgrims to Jerusalem, the Templars were among the wealthiest and most powerful bodies in the medieval world. Yet two centuries later, they were arrested, accused of blasphemy, heresy and orgies, and their leaders were burnt at the stake. Part guide, part history, this book investigates the Templar legends and legacy - from the mysteries of Solomon's Temple in Jerusalem, via nineteenth century development of the Freemasons, through to Templar appearances in Dan Brown and Indiana Jones. This book explains the whole context of Templar history, including the recent evidence discovered by the Vatican that the Templars were not guilty of heresy. It also features a guide to Templar castles and sites.

Michael Haag, in his well-knit narrative gets through an enormous spread of history * Daily Telegraph *
An essential guide for anyone who wants a comprehensive guide to the Templars ... a perfect place to begin your quest. * Good Book Guide *
Admirably comprehensive and balanced * Birmingham Mail *
An intriguing and revealing work that surprises and entertains * Nottingham Evening Post *
The true story of the templars, revealed in Haag's book, is even more astonishing than the legends they spawned * Waterstone's Books Quarterly *
Michael Haag's comprehensive and considered book covers a multitude of topics related to the group... -- Fachtna Kelly * Sunday Business Post *

Michael Haag has written widely on the Egyptian, Classical and Medieval worlds. He is author of the much-admired Alexandria: City of Memory (Yale University Press), and of bestselling Rough Guides to Tutankhamun and The Da Vinci Code.

GOR008050192
Templars: History and Myth: From Solomon's Temple to the Freemasons by Michael Haag
Michael Haag
Used - Like New
Paperback
Profile Books Ltd
2009-07-02
384
1846681537
9781846681530
N/A
Book picture is for illustrative purposes only, actual binding, cover or edition may vary.
This is a used book - there is no escaping the fact it has been read by someone else and it will show signs of wear and previous use. Overall we expect it to be in very good condition, but if you are not entirely satisfied please get in touch with us.