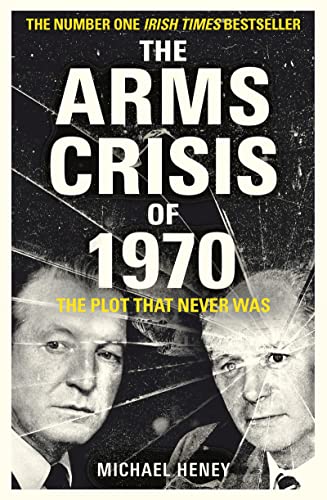 The Arms Crisis of 1970 by Michael Heney

A serious, revisionist history of the most notorious court case in postwar Irish history: two Irish cabinet ministers, alongside an army officer and other figures, were accused by the Taoiseach of smuggling arms to the IRA in Northern Ireland.

The Arms Crisis of 1970: The Plot that Never Was by Michael Heney

The number one Irish Times bestseller

In 1970, Taoiseach Jack Lynch accused two cabinet ministers, Charles Haughey and Neil Blaney, of smuggling arms to the IRA in Northern Ireland. The criminal prosecution that followed was a cause celebre at the time. All the accused were acquitted, but it generated a political crisis that would be one of the major events of modern Irish history.

In the fifty years since, myth and controversy has surrounded the trial and its aftermath. Michael Heney has unearthed astonishing new evidence, raising serious questions about Lynch and his relationship with Haughey. The Arms Crisis of 1970 is the first comprehensive investigation into the arms trial prosecution, and how the jury came to their verdict of acquittal.

'An indisputable, forensic interpretation of the events of 1970 ... Impressive for its methodology, and is indispensable for anyone interested in what actually happened 50 years ago' Colm Toibin, Irish Times, Books of the Year

'Persuasive ... A real life whodunnit written with the pace and drama of a political thriller' Eilis O'Hanlon, Irish Independent

'Heney strips away the lies associated with the great Irish scandal of 1970 ... A ground-breaking book' Diarmaid Ferriter

'Brilliant de-bunking of the myths, heroes and villains of the Arms Crisis' Mary O'Rourke, Sunday Independent