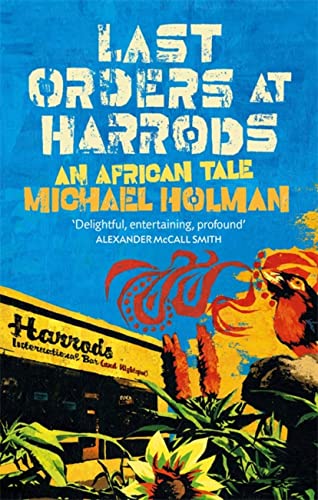 Out of Stock
$13.49
inc. GST
* A timely and satirical - yet affectionate - portrait of the ups and downs of life in contemporary Africa
Very Good
Only 0 left

Last Orders At Harrods: An African Tale by Michael Holman

Charity Mupanga is the widowed owner of Harrods International Bar (and Nightspot) - a favourite meeting place for the movers and shakers of Kibera. While she can handle most challenges, from an erratic supply of Worcestershire sauce, the secret ingredient in her cooking, to the political tensions in East Africa's most notorious slum and a cholera outbreak that follows the freak floods in the state of Ubuntu, some threatening letters from London lawyers are beginning to overwhelm her.

Well-meant but inept efforts to foil the lawyers by Edward Furniver, a former fund manager who runs Kibera's co-operative bank, bring Harrods International Bar to the brink of disaster, and Charity close to despair. In the nick of time an accidental riot, triggered by World Bank President Hardwick Hardwicke's visit to the slum, coupled with some quick thinking by Titus Ntoto, the 14-year-old leader of Kibera's toughest gang, the Mboya Boys United Football Club, help Charity - and Harrods - to triumph in the end.

** 'A highly entertaining account of how people make the best of living in sub-Saharan Africa * Alexander McCall Smith, THE HERALD Books of the Year *
** 'Some devastatingly hilarious moments ... a satire that should be required bedtime reading at Gleneagles * SCOTSMAN *
** 'This wickedly satirical novel is also a serious critique of Africa's troubled state * GUARDIAN *
** 'Jolly good fun * DAILY MAIL *

Michael Holman grew up in Zimbabwe and was educated in Africa and England. After university he was forced to flee Zimbabwe for Zambia, where he lived for many years. He was Africa Editor of the FINANCIAL TIMES from 1984-2002, and is now a writer and journalist based in London.

GOR001838160
Last Orders At Harrods: An African Tale by Michael Holman
Michael Holman
Used - Very Good
Paperback
Little, Brown Book Group
2007-03-01
320
0349120099
9780349120096
N/A
Book picture is for illustrative purposes only, actual binding, cover or edition may vary.
This is a used book - there is no escaping the fact it has been read by someone else and it will show signs of wear and previous use. Overall we expect it to be in very good condition, but if you are not entirely satisfied please get in touch with us.