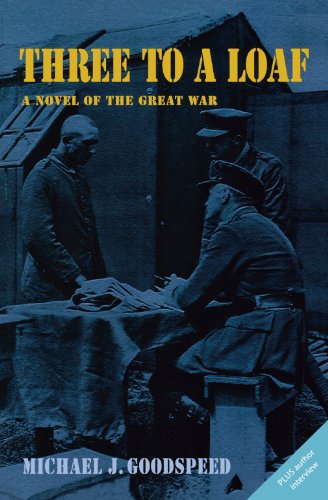 Three to a Loaf
by Michael J. Goodspeed

Three to a Loaf is the page-turning drama of a young Anglo-German Canadian smuggled into Germany during the First World War to discover the Imperial General Staff's top-secret plan to break the deadlock on the Western Front.

Three to a Loaf Summary

Three to a Loaf: A Novel of the Great War by Michael J. Goodspeed

Three to a Loaf is the First World War story of Rory Ferrall, a young Canadian officer of Anglo-German descent who, after being wounded and disfigured at Ypres, comes to the attention of British military intelligence. Ferrall's German background is valuable to the war's planners. Hundreds of German-Americans had returned to the Fatherland to fight for the Kaiser at the outbreak of war in August 1914 and the British captured one. Cleverly trained to impersonate the captured German-American officer, Ferrall is smuggled into wartime Germany to infiltrate the German General Staff and discover their top-secret plan to break the stalemate on the Western Front.

A page-turning novel of war and espionage, Three to a Loaf is also a portrait of societies and individuals pushed to the breaking point, and in some cases, beyond. Michael Goodspeed artfully blends the tension of a thriller with period detail, the detached commentary of a nitty-gritty travelogue, and psychological understanding of a harried man facing soul-destroying ethical decisions.

Three to a Loaf Reviews

An exciting Great War story of soldiering and spying. Goodspeed's book is almost unique for being well-written and accurate militarily.

A compelling account that is fiction in name only. Goodspeed's research and personal military experience make this fast-paced story powerful and authentic, as real for World War I as The Red Badge of Courage was for the American Civil War.

A great read.didn't put it down until 1 a.m. .a full-bodied, compelling espionage thriller. Goodspeed has captured the horror of life in the mud and blood-filled trenches of World War I as only an experienced soldier with a great eye can. On top of that, he's got down pat the cultural differences in the manners, mindsets and methods of the Britons and Germans among whom his Canadian hero finds himself.

Michael J. Goodspeed is a historian and novelist. In addition to a successful writing career he has been an infantry officer and a manager in high-tech firms. He has lived and worked across Canada and on several continents. He lives on an acreage in Harrowsmith, Ontario.