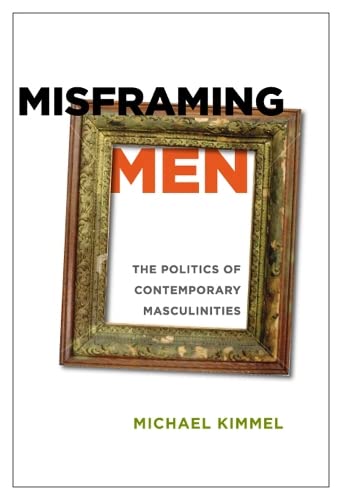 In Stock
$55.99
inc. GST
Argues that the media have largely misrepresented the debate about modern masculinity and maleness. The author discusses Promise Keepers rallies, mythopoetic gatherings, white supremacists; accuses antifeminists as the real male bashers and questions the assertions that men suffer from domestic violence to the same degree as women.
Very Good
Only 1 left

Misframing Men: The Politics of Contemporary Masculinities by Michael Kimmel

This past decade has witnessed an extraordinary transformation in men's lives. For years, wave after wave of the women's movement, a movement that reshaped every aspect of American life, produced nary a ripple among men. But suddenly men are in the spotlight.

Yet, the public discussions often seem strained, silly, and sometimes flat-out wrong. The spotlight itself seems to obscure as much as it illuminates. Old tired cliches about men's resistance to romantic commitment or reluctance to be led to the marriage altar seem perennially recyclable in advice books and on TV talk shows, but these days the laughter feels more forced, the defensiveness more pronounced. Pop biologists avoid careful confrontation with serious scientific research in their quest to find anatomical or evolutionary bases for promiscuity or porn addiction, hoping that by fiat, one can pronounce that "boys will be boys" and render it more than a flaccid tautology. And political pundits wring their hands about the feminisation of American manhood, as if gender equality has neutered these formerly proud studs. Misframing Men, a collection of Michael Kimmel's commentaries on contemporary debates about masculinity, argues that the media have largely misframed this debate.

Kimmel, among the world's best-known scholars in gender studies, discusses political moments such as the Virginia Military Institute and Citadel cases that reached the Supreme Court (he participated as expert witness for the Justice Department) along with Promise Keepers rallies, mythopoetic gatherings, and white supremacists. He takes on antifeminists as the real male bashers, questions the unsubstantiated assertions that men suffer from domestic violence to the same degree as women, and examines the claims made by those who want to rescue boys from the "misandrous" reforms initiated by feminism.

In writings both solidly grounded and forcefully argued, Kimmel pushes the boundaries of today's modern conversation about men and masculinity.

"Kimmel offers an insightful, balanced view of the problems behind 'me Tarzan, you Jane'."--Publishers Weekly (web exclusive)

GOR008840325
Misframing Men: The Politics of Contemporary Masculinities by Michael Kimmel
Michael Kimmel
Used - Very Good
Paperback
Rutgers University Press
2010-06-15
256
0813547636
9780813547633
N/A
Book picture is for illustrative purposes only, actual binding, cover or edition may vary.
This is a used book - there is no escaping the fact it has been read by someone else and it will show signs of wear and previous use. Overall we expect it to be in very good condition, but if you are not entirely satisfied please get in touch with us.