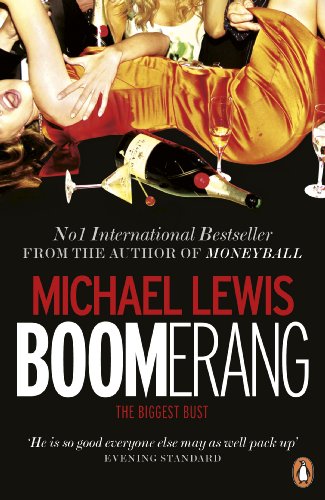 In Stock
17,49 $
inc. GST
Right now, Europe is in serious financial chaos. In Greece, infrastructure costs mean it would be cheaper to transport all Greek rail passengers by taxi, and hairdressing is classified as arduous for tax avoidance purposes. This title reveals the true natures of the countries caught up in - and exacerbating - our boomerang economies.
Like New Very Good Good Well Read
Only 2 left

In this hilarious, fascinating, timely must-read, Michael Lewis reveals the true natures of the countries caught up in - and exacerbating - our boomerang economies, showing how the financial meltdown hit us all in the face. Right now, Europe is in serious financial chaos. In Greece, infrastructure costs mean it would be cheaper to transport all Greek rail passengers by taxi, and hairdressing is classified as arduous for tax avoidance purposes. In Iceland, Range Rovers frequently explode as owners collect the insurance to pay for them. Ireland saw the entire country put up for sale - to itself, while the Germans expected the whole world to behave like them. But the whole world didn't.

'A tour de force... All those questions you've half-asked yourself: nowhere else will you find them answered with such incisive wit or terrifying clarity' Mail on Sunday

Fascinating ... the book could not be more timely ... a sharp-edged narrative that leaves readers with a visceral understanding of the fiscal recklessness that lies behind today's headlines -- Michiko Kakutani * New York Times *
Michael Lewis's bravura journey through Europe's economic underbelly brilliantly charts the consequences of a world plagued by debt ... highly enjoyable ... nicely politically incorrect, often very funny, and shot through with genuine insight -- Robert Harris * Sunday Times *
Brilliant ... he has a novelist's gift * Spectator, Books of the Year *
Lewis' investigation of bubbles across Europe is brilliantly, sadly hiliarious * GQ magazine *
Caustically funny ... urgent and chilling ... a thought-provoking read -- Ian Morris * Observer *
Lewis is the finest storyteller of our generation -- Malcolm Gladwell
He is so good everyone else may as well pack up * Evening Standard *
Michael Lewis meets some extraordinary characters in his excursion through the barely controlled madness that is modern finance ... lucid, entertaining -- Tony Barber * Financial Times *
He writes with the wit and observational eye of a travel writer -- Richard Fitzpatrick * Irish Examiner *
He writes quite brilliantly and understands the complex financial matters whereof he speaks. As polemical prose goes, it is hard to beat -- Howard Davies * Management Today *

Michael Lewis's global bestselling books lift the lid on the biggest stories of our times. They include Flash Boys, a game-changing expose of high-speed scamming; The Big Short, which was made into a hit Oscar-winning film; Moneyball, the story of a maverick outsider who beat the system; and Liar's Poker, the book that defined the excesses of the 1980s. Michael Lewis was born in New Orleans and educated at Princeton University and the London School of Economics.

GOR010196284
Boomerang: The Meltdown Tour by Michael Lewis
Michael Lewis
Used - Like New
Paperback
Penguin Books Ltd
2012-08-22
240
0241955025
9780241955024
N/A
Book picture is for illustrative purposes only, actual binding, cover or edition may vary.
This is a used book - there is no escaping the fact it has been read by someone else and it will show signs of wear and previous use. Overall we expect it to be in very good condition, but if you are not entirely satisfied please get in touch with us.