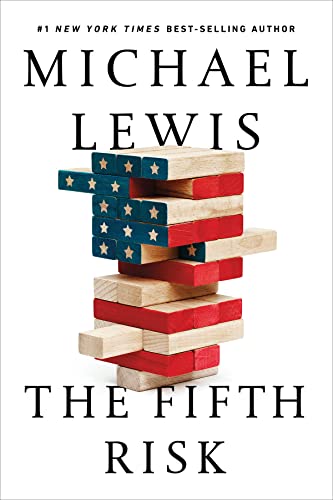 The Fifth Risk
by Michael Lewis

What are the consequences if the people given control over our government have no idea how it works?
Very Good
Only 1 left

The Fifth Risk by Michael Lewis

"The election happened," remembers Elizabeth Sherwood-Randall, then deputy secretary of the Department of Energy. "And then there was radio silence." Across all departments, similar stories were playing out: Trump appointees were few and far between; those that did show up were shockingly uninformed about the functions of their new workplace. Some even threw away the briefing books that had been prepared for them.

Michael Lewis's brilliant narrative takes us into the engine rooms of a government under attack by its own leaders. In Agriculture the funding of vital programs like food stamps and school lunches is being slashed. The Commerce Department may not have enough staff to conduct the 2020 Census properly. Over at Energy, where international nuclear risk is managed, it's not clear there will be enough inspectors to track and locate black market uranium before terrorists do.

Willful ignorance plays a role in these looming disasters. If your ambition is to maximize short-term gains without regard to the long-term cost, you are better off not knowing those costs. If you want to preserve your personal immunity to the hard problems, it's better never to really understand those problems. There is upside to ignorance, and downside to knowledge. Knowledge makes life messier. It makes it a bit more difficult for a person who wishes to shrink the world to a worldview.

If there are dangerous fools in this book, there are also heroes, unsung, of course. They are the linchpins of the system-those public servants whose knowledge, dedication, and proactivity keep the machinery running. Michael Lewis finds them, and he asks them what keeps them up at night.

"[A] page turner.... [Lewis'] most ambitious and important book." -- New York Times Book Review
"Fascinating-and at times harrowing.... Lewis tells an important and timely story, one that all of us who pay for, care about, and want government to work should hear." -- NPR
"A hymn to the 'deep state,' which is revealed as nothing more than people who know what they're talking about." -- Cory Doctorow - Boing Boing
"[A] spellbinding, alarming analysis of the most serious threats to Americans' safety happening now from inside the U.S. government." -- Quartz
"Displaying his usual meticulous research and fluid prose, [Lewis] makes the federal bureaucracy come alive by focusing on a few individuals within each agency with fascinating-and sometimes heartwarming-backstories....[A] well-written primer on how the government serves citizens in underappreciated ways." -- Kirkus (starred review)
"Illuminating.... It's relevance to readers won't end with the Trump era." -- Publishers Weekly

GOR009962173
The Fifth Risk by Michael Lewis
Michael Lewis
Used - Very Good
Hardback
WW Norton & Co
2018-10-02
256
1324002646
9781324002642
Commended for New York Times Notable Selection 2018 Short-listed for Los Angeles Times Book Prize 2018
Book picture is for illustrative purposes only, actual binding, cover or edition may vary.
This is a used book - there is no escaping the fact it has been read by someone else and it will show signs of wear and previous use. Overall we expect it to be in very good condition, but if you are not entirely satisfied please get in touch with us.