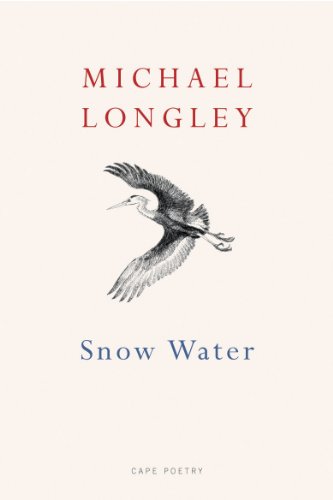 Used Price
$12.99
inc. GST
Free Shipping in Australia
The poems collected in Snow Water find their gravity and centre in Michael Longley's adopted home in west Mayo, but range widely in their attention - from ancient Greece to Paris and Pisa, from Central Park to the trenches of the Somme.
Reviews:
Trustpilot
Very Good Good

The poems collected in Snow Water find their gravity and centre in Michael Longley's adopted home in west Mayo, but range widely in their attention - from ancient Greece to Paris and Pisa, from Central Park to the trenches of the Somme. Meditations on nature and mortality, there is a depth and delicacy to these poems, a state of lucid wonder, that allows for the easy companionship of love poem and elegy, hymns to marriage and friendship and lyric explorations of loss. Though the embodiment of these themes is often found in the wildlife of Carrigskeewaun and Allaran Point - the plovers and oystercatchers, whooper swans and snow geese, the hares and otters, the marsh marigolds and yellow flags - Snow Water is emphatically a celebration of humanity. These are all, in a way, poems of love and kinship - even the magnificent sequence that links the horrors of the Great War with those of the Trojan War, and with all the wars between. What Longley says of Edward Thomas might easily be said of him: 'The nature poet turned into a war poet as if/ He could cure death with the rub of a dock leaf'. Full of intensity and grace, tenderness and wisdom, these are poems of deceptive simplicity from a craftsman of international stature.

"His work indicates one of the gifts of the major poet, of making the one life speak for all, and its corollary, of seeming to be able to speak to anyone" -- Sean O'Brien
"Michael Longley's affectionate metre, his clean-cut and lucid measure, is one of the most distinguished accomplishments in contemporary poetry" -- Douglas Dunn
"A keeper of the artistic estate, a custodian of grief and wonders" -- Seamus Heaney

Michael Longley was born in Belfast in 1939 and educated at the Royal Belfast Academical Institution and Trinity College Dublin where he read Classics. He has published ten collections of poetry including Gorse Fires (1991) which won the Whitbread Poetry Award, and The Weather in Japan (2000) which won the Hawthornden Prize, the T. S. Eliot Prize and the Irish Times Poetry Prize. His Collected Poems was published in 2006. In 2001 he received the Queen's Gold Medal for Poetry, and in 2003 the Wilfred Owen Award. He was awarded a CBE in 2010. He was Ireland Professor of Poetry, 2007-2010. He and his wife, the critic Edna Longley, live and work in Belfast.

GOR001864135
Snow Water by Michael Longley
Michael Longley
Used - Very Good
Paperback
Vintage Publishing
2004-03-15
80
0224072579
9780224072571
N/A
Book picture is for illustrative purposes only, actual binding, cover or edition may vary.
This is a used book - there is no escaping the fact it has been read by someone else and it will show signs of wear and previous use. Overall we expect it to be in very good condition, but if you are not entirely satisfied please get in touch with us.