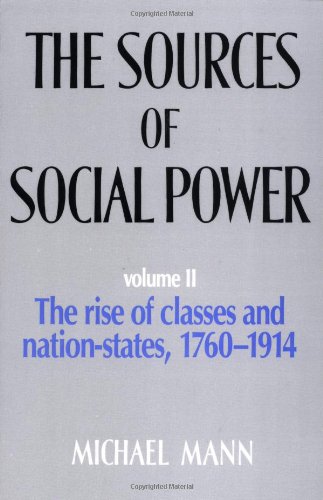 The Sources of Social Power
by Michael Mann

In Stock
$37.99
+10% GST
This second volume of Michael Mann's analytical history of social power deals with power relations between the Industrial Revolution and the First World War, focusing on France, Great Britain, Hapsburg Austria, Prussia/Germany and the United States.
Very Good
Only 2 left

The Sources of Social Power Summary

The Sources of Social Power: Volume 2: The Rise of Classes and Nation States 1760-1914 by Michael Mann

This second volume of Michael Mann's analytical history of social power deals with power relations between the Industrial Revolution and the First World War, focusing on France, Great Britain, Hapsburg Austria, Prussia/Germany and the United States. Based on considerable empirical research it provides original theories of the rise of nations and nationalism, of class conflict, of the modern state and of modern militarism. While not afraid to generalise, it also stresses social and historical complexity. The author sees human society as 'a patterned mess' and attempts to provide a sociological theory appropriate to this. This theory culminates in the final chapter, an original explanation of the causes of the First World War.

The Sources of Social Power Reviews

'It is a study bursting with interesting ideas as well as covering a rich sweep of empirical materials ... This book, like its predecessor, will become something of a sociological classic ... very few authors could have marshalled such diverse material in such a systematic , yet analytically precise way.' Anthony Giddens, New Stateman & Society
"The ambition of the conception is, against all conventional expectations, matched by the clarity and grandeur of the execution." The Times Literary Supplement
"This is a book in the grand Weberian tradition. Mann's conceptual skills and historical grasp are virtuosic and the scope of his enterprise is truly impressive." Politics and Society
"...the detail and scale of the work ensure that readers will find it informative and useful....intriguing and educative." Chris Sparks, American Journal of Sociology
"Not the least of Mann's achievements is his ability to gather and analyze comparable statistical material for much of this period for all five states....The insights and observations produced by Mann's fecund mind as it ranges over a century-and-a-half for five major countries are legion....Mann packs so much historical and comparative synthesis into his book and is so widely knowledgeable about social and state development in Europe and America that no student of comparative or historical sociology or state building will want to ignore it." Sidney Tarrow, American Political Science Review
"This work offers a treasure trove of facts and interpretations that will be useful to readers in many disciplines...." Choice
"...a unique brand of historical sociology that is refreshingly iconoclastic, remarkably complex, and breathtakingly ambitious....a must-read for comparative and historical sociologists." Philip S. Gorski, Contemporary Sociology

GOR002684776
The Sources of Social Power: Volume 2: The Rise of Classes and Nation States 1760-1914 by Michael Mann
Michael Mann
Used - Very Good
Paperback
Cambridge University Press
1993-09-24
828
052144585X
9780521445856
N/A
Book picture is for illustrative purposes only, actual binding, cover or edition may vary.
This is a used book - there is no escaping the fact it has been read by someone else and it will show signs of wear and previous use. Overall we expect it to be in very good condition, but if you are not entirely satisfied please get in touch with us.