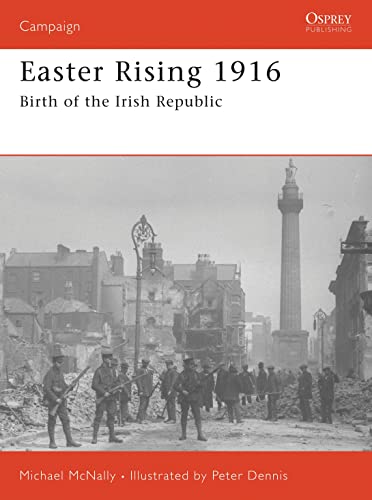 Used Price
$21.99
inc. GST
Free Shipping in Australia
On Easter Monday 1916, a rebellion was launched from the steps of the Dublin General Post Office and Patrick Pearse proclaimed the existence of an Irish Republic and the establishment of a Provisional Government. Covering this important milestone in the ongoing Anglo-Irish struggle, this work examines the roots and outcome of this conflict.
Reviews:
Trustpilot
Very Good

Easter Rising 1916: Birth of the Irish Republic by Michael McNally

When the outbreak of World War I delayed home rule for Ireland, a faction of Irish nationalists - the Irish Republican Brotherhood - decided to take direct action. On Easter Monday 1916, a rebellion was launched from the steps of the Dublin General Post Office and Patrick Pearse proclaimed the existence of an Irish Republic and the establishment of a Provisional Government. The British response was a military one and over the next five days they drove the rebels back in violent street fighting until the Provisional Government surrendered on 29 April. Central Dublin was left in ruins. Covering in detail this important milestone in the ongoing Anglo-Irish struggle, bestselling author Michael McNally thoroughly examines the politics and tactics employed, to provide a well-researched study of the roots and outcome of this conflict. Furthermore, the array of unique photographs depicting this calamitous event help to bring to life one of the key episodes that shaped Irish history.

"The 1916 rebellion is... given new life and meaning in an overview which links early events to modern Irish culture." --California Bookwatch (July 2007)

"Michael McNally does a superlative job of telling both the origins of the campaign as well as the events of the days that followed... All of this is superbly illustrated by Peter Denis who brings some of the more important events to life. This is further enhanced by period photos and superb maps and diagrams. Little know outside the British Isles, this is a fascinating read that I can highly recommend to you." --Scott Van Aken, modelingmadness.com (May 2007)

Michael McNally is 40 years of age and was born, raised and educated in London. Of Irish parentage, Michael has an active interest in Irish history, and military history in particular. He is married with two children and lives in Germany where he works for a major reinsurance company. The author lives in Germany.

GOR002016409
Easter Rising 1916: Birth of the Irish Republic by Michael McNally
Michael McNally
Campaign
Used - Very Good
Paperback
Bloomsbury Publishing PLC
2007-03-07
96
1846030676
9781846030673
N/A
Book picture is for illustrative purposes only, actual binding, cover or edition may vary.
This is a used book - there is no escaping the fact it has been read by someone else and it will show signs of wear and previous use. Overall we expect it to be in very good condition, but if you are not entirely satisfied please get in touch with us.