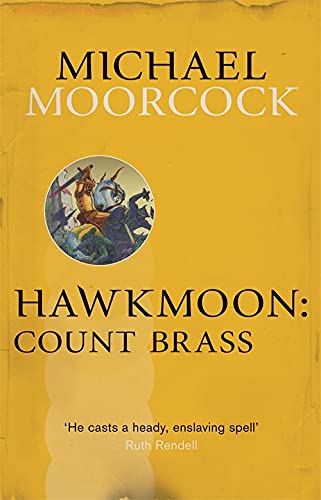 'War, albeit with the Dark Empire, was clean compared to this ...'

Everything that Dorian Hawkmoon ever loved will be torn away from him, its very existence and memory wiped out for ever ...

The Eternal Champion must test the limits of reality in a desperate bid to regain a lost love. But first Hawkmoon, Elric, Corum and others must pool their strength - and their swords - to bring about the most mighty change in the order of the multiverse.

Contains Count Brass, The Champion of Garathorn and The Quest for Tanelorn

Michael Moorcock (1939-)
Michael Moorcock is one of the most important figures in British SF and Fantasy literature. The author of many literary novels and stories in practically every genre, his novels have won and been shortlisted for numerous awards including the Hugo, Nebula, World Fantasy, Whitbread and Guardian Fiction Prize. In 1999, he was given the World Fantasy Life Achievement Award; in 2001, he was inducted into the SF Hall of Fame; and in 2007, he was named a SFWA Grandmaster. Michael Moorcock is also a musician who has performed since the seventies with his own band, the Deep Fix; and, as a member of the prog rock band, Hawkwind, won a gold disc. His tenure as editor of New Worlds magazine in the sixties and seventies is seen as the high watermark of SF editorship in the UK, and was crucial in the development of the SF New Wave. Michael Moorcock's literary creations include Hawkmoon, Corum, Von Bek, Jerry Cornelius and, of course, his most famous character, Elric. He has been compared to, among others, Balzac, Dumas, Dickens, James Joyce, Ian Fleming, J.R.R. Tolkien and Robert E. Howard. Although born in London, he now splits his time between homes in Texas and Paris.

GOR005498838
Hawkmoon: Count Brass by Michael Moorcock
Michael Moorcock
Used - Very Good
Paperback
Orion Publishing Co
2013-05-09
416
0575092483
9780575092488
N/A
Book picture is for illustrative purposes only, actual binding, cover or edition may vary.
This is a used book - there is no escaping the fact it has been read by someone else and it will show signs of wear and previous use. Overall we expect it to be in very good condition, but if you are not entirely satisfied please get in touch with us.