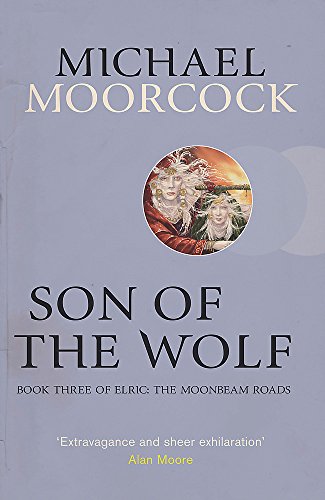 Son of the Wolf
by Michael Moorcock

Out of Stock
$21.49
inc. GST
Moorcock's Multiverse presents for the first time, definitive editions of Michael Moorcock's most influential work, fully revised and updated by the author.
Good
Only 0 left

Son of the Wolf Summary

Son of the Wolf: Book Three of Elric: The Moonbeam Roads by Michael Moorcock

'My name is Oonagh, granddaughter of the Countess Oona von Bek.'

While Elric, the last Sorcerer Emperor of Melnibone, hangs crucified above the deck of an enemy ship, his mind quests across worlds for the return of his sorcerous black sword Stormbringer.

In another universe, his daughter, Oona, follows her granddaughter through the multiverse, seeking to keep her from their enemy, Gaynor the Damned, and his allies.

'Oonagh, meanwhile, will require the help of Elric, his counterpart Ulric von Bek, and as many manifestations of the Eternal Champion as she can call upon, for Gaynor's plan goes far beyond a simple kidnapping. If Oonagh can be forced to lead them to Elric's albino son, Gaynor will be able to use him to summon the Runestaff. And that mystical artefact, in the hands of Gaynor and the Dark Empire of Granbretan, could threaten the entire multiverse, and the existence of the Cosmic Balance itself ...

Son of the Wolf Reviews

A triumph of mature talent and imagination - Publishers Weekly

Michael Moorcock (1939-)
Michael Moorcock is one of the most important figures in British SF and Fantasy literature. The author of many literary novels and stories in practically every genre, his novels have won and been shortlisted for numerous awards including the Hugo, Nebula, World Fantasy, Whitbread and Guardian Fiction Prize. In 1999, he was given the World Fantasy Life Achievement Award; in 2001, he was inducted into the SF Hall of Fame; and in 2007, he was named a SFWA Grandmaster. Michael Moorcock is also a musician who has performed since the seventies with his own band, the Deep Fix; and, as a member of the prog rock band, Hawkwind, won a gold disc. His tenure as editor of New Worlds magazine in the sixties and seventies is seen as the high watermark of SF editorship in the UK, and was crucial in the development of the SF New Wave. Michael Moorcock's literary creations include Hawkmoon, Corum, Von Bek, Jerry Cornelius and, of course, his most famous character, Elric. He has been compared to, among others, Balzac, Dumas, Dickens, James Joyce, Ian Fleming, J.R.R. Tolkien and Robert E. Howard. Although born in London, he now splits his time between homes in Texas and Paris.

GOR007089046
Son of the Wolf: Book Three of Elric: The Moonbeam Roads by Michael Moorcock
Michael Moorcock
Used - Good
Paperback
Orion Publishing Co
2013-03-28
352
057510631X
9780575106314
N/A
Book picture is for illustrative purposes only, actual binding, cover or edition may vary.
The book has been read but remains in clean condition. All pages are intact and the cover is intact. Some minor wear to the spine.