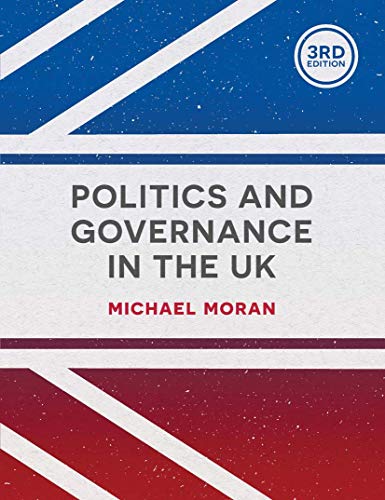 Politics and Governance in the UK
by Michael Moran

Out of Stock
$174.99
inc. GST
This thoroughly revised third edition of a much praised, comprehensive text on British politics and governance takes into account developments up to and including the 2015 General Election and reflects on the recent upheavals in Britain's constitutional settlement.
Very Good
Only 0 left

Politics and Governance in the UK Summary

Politics and Governance in the UK by Michael Moran

The third edition of this comprehensive and innovative textbook provides an invaluable narrative and insight into the ever-changing landscape of British politics.

Updated to cover the 2015 General Election, the Scottish independence referendum and changing relations with the European Union, this extensively revised new edition sets out to provide students with a clear understanding of the core features of British politics and contemporary governance, as well as an examination of the way in which the governing process is becoming increasingly 'multi-level' and 'multi-agency'.

Written in a concise and accessible style by one of the leading authors in the field, this engaging text provides an illuminating framework that draws on the range of analytical issues and theoretical debates in the study of British politics. Through Moran's unrivalled account of the way Britain is governed, it is clear to see why this text continues to be essential reading for undergraduate students of British politics.

Politics and Governance in the UK Reviews

'Rigorously-researched, theoretically-informed, and, above all, incredibly readable, Politics and Governance in the UK is, quite simply, a tour de force of a textbook. It is an absolute "must read" for all students of British politics'. - Nicola Smith, University of Birmingham, UK 'Comprehensive and accessible and yet engaging and innovative at the same time, the latest edition of this landmark text provides a judicious and creatively illustrated mix of theory, commentary and analysis. Moran brings the trials and tribulations of British politics alive as never before.' - Colin Hay, Sciences Po, France Review of previous edition: "Unlike many British politics texts, Moran succeeds in weaving theoretical debates directly into the narrative, producing a comprehensive and readable volume that is easily accessible to students both inside and outside the UK." - Terrence Casey, Rose-Hulman Institute of Technology, USA, and Executive Director of the APSA British Politics Group 'Politics and Governance in the UK has established itself as the best introductory text for students of British politics. This new edition draws on the latest research and most recent political developments to provide an unrivalled account of the way Britain is governed. - Andrew Gamble, University of Sheffield and University of Cambridge, UK

Michael Moran is Emeritus Professor of Government, The University of Manchester, UK. A Fellow of the British Academy, he is a past editor of Political Studies and Government and Opposition. His other books include Business, Politics and Society (2009) and The British Regulatory State (2007).

1. Why Politics Matters And Why British Politics Matters.- 2. Politics And Policy In A Capitalist Democracy.- 3. The Constitution And The British Political Culture.- 4. The Core Executive In The Westminster System.- 5. Departments And Agencies In The Westminster System.- 6. Representing Interests In The Westminster System.- 7. Parliament In The Westminster System.- 8. Devolved Government In Northern Ireland.- 9. From Devolution To Dissolution: Governing Scotland And Wales.- 10. The Worlds Of Local And Regional Government: Multi-Level Governance In Action.- 11. Europeanizing British Government.- 12. Parties And Their Organization.- 13. Parties And Their Ideologies.- 14. How Citizens Participate.- 15. How Political Communication Happens.- 16. How Elections Are Decided.- 17. How Leaders Are Selected.- 18. Understanding Policy Under Multilevel Governance.- 19. Managing Resource Raising And Allocation.- 20. Managing Justice And Security.- 21. Managing, Protecting And Creating Citizen Rights.- 22. Understanding The British State: Theories And Evidence.

GOR010185962
Politics and Governance in the UK by Michael Moran
Michael Moran
Used - Very Good
Hardback
Macmillan Education UK
2015-08-07
448
1137365978
9781137365972
N/A
Book picture is for illustrative purposes only, actual binding, cover or edition may vary.
This is a used book - there is no escaping the fact it has been read by someone else and it will show signs of wear and previous use. Overall we expect it to be in very good condition, but if you are not entirely satisfied please get in touch with us.