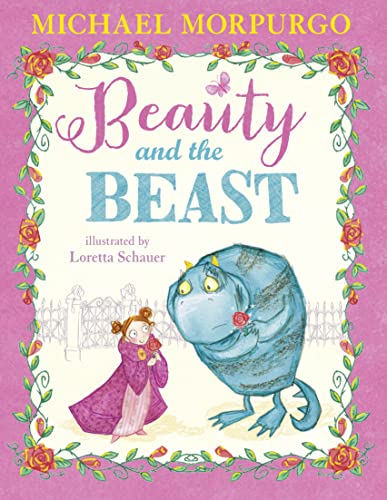 Beauty and the Beast
by Michael Morpurgo

Beauty and the Beast Summary

Beauty and the Beast by Michael Morpurgo

After encountering a fearsome beast at a mysterious palace, down-on-his-luck merchant Marco is forced to make a promise in exchange for his life: he must persuade one of his three daughters to return to the palace in his place - but she must come of her own free will.

Beautiful, kind-hearted Belle agrees at once to return to the palace, and there she and the Beast exist companionably, with the Beast asking of Belle the same question at the end of each day: "Dearest Belle, will you marry me?"

After a return home to consult with her father, Belle resolves to follow her heart and return to the Beast, but her plans are thwarted by the trickery of her jealous sisters. When, at last, Belle is able to find her way back to the palace, she finds her beloved Beast lying as still as death on the ground. As Belle's tears fall on his face, the Beast is transformed into a handsome prince - the ancient spell upon him broken by Belle's tears of true love...

Beauty and the Beast Reviews

Praise for Michael Morpurgo:
"Michael Morpurgo writes brilliantly about war and animals, conveying the big emotions without preaching." - The Guardian

"Champagne quality over a wide range of subjects." - Daily Telegraph

"There are few children's writers as compelling as Michael Morpurgo." - Daily Express

"Morpurgo's gift is to make this long-ago world of danger and heartbreak accessible without ever patronising his young readers." - Sunday Mercury

"Morpurgo, as always, is subtle and skillful, and incorporates social and moral issues into his writing without being self-righteous or detracting from the quality of the narrative"
Elizabeth Reilly - British Council

"The former children's laureate has the happy knack of speaking to both child and adult readers." -The Guardian.

Loretta Schauer has always had a passion for drawing and creativity, and honed her illustration skills through evening classes. In addition to her illustration, she works for Heath Hands, a charity dedicated to conservation and horticulture.

Loretta lives in Highgate, North London with her husband Peter and their hamster, Eduardo.

Beauty and the Beast is Loretta's first picture book.

GOR006014265
Beauty and the Beast by Michael Morpurgo
Michael Morpurgo
Used - Very Good
Paperback
HarperCollins Publishers
2013-06-04
32
0007513402
9780007513406
N/A
Book picture is for illustrative purposes only, actual binding, cover or edition may vary.
This is a used book - there is no escaping the fact it has been read by someone else and it will show signs of wear and previous use. Overall we expect it to be in very good condition, but if you are not entirely satisfied please get in touch with us.