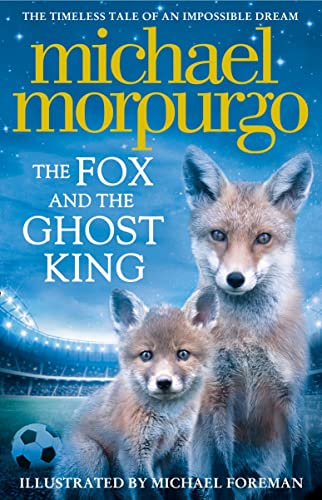 The Fox and the Ghost King
by Michael Morpurgo

A delightful tale of victory against all odds from master storyteller, Michael Morpurgo, lavishly illustrated by Michael Foreman.

The Fox and the Ghost King Summary

The Fox and the Ghost King by Michael Morpurgo

A delightful tale of victory against all odds from master storyteller, Michael Morpurgo, lavishly illustrated by Michael Foreman.

"Every fox in the whole town, in the whole country just about, is a football fan... And we all have an impossible dream."

In a cosy den under a garden shed lives a family of foxes. They love to watch football - all foxes do. But their favourite team keeps losing and losing, and it seems like things will never look up.

That is, until Daddy Fox finds the ghost of a king, buried underneath a car park. A king who wishes only to be free.

"Release me," says the Ghost King, "and I can do anything. Just tell me your greatest wish."

For these football-loving foxes, might everything be about to change...?

The Fox and the Ghost King Reviews

GOR007991056
The Fox and the Ghost King by Michael Morpurgo
Michael Morpurgo
Used - Like New
Hardback
HarperCollins Publishers
2016-09-22
144
0008215774
9780008215774
N/A
Book picture is for illustrative purposes only, actual binding, cover or edition may vary.
This is a used book - there is no escaping the fact it has been read by someone else and it will show signs of wear and previous use. Overall we expect it to be in very good condition, but if you are not entirely satisfied please get in touch with us.