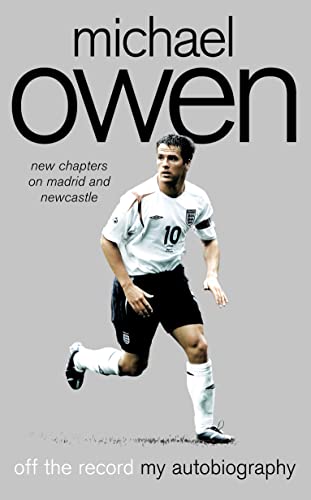 Michael Owen reveals the highlights and pitfalls of being a professional footballer in his first official autobiography, which contains his personal reflections on eight years in the game, including two World Cups, two European Championships and goalscoring records for club and country. Updated to include his first full season with Real Madrid.

Michael Owen reveals the highlights and pitfalls of being a professional footballer in his first official autobiography, which contains his personal reflections on eight years in the game, including two World Cups, two European Championships and goalscoring records for club and country. Updated to include his first full season with Real Madrid.

After his famous goal against Argentina in France `98, Michael Owen was forced to grow up almost overnight, his sudden fame propelling him to stardom to the extent that the hopes of a football nation now rest on the slender frame of this 26-year-old.

In his autobiography, Owen is forthright in his views on the game: he reacts to the accusations of diving, his susceptibility to injury, and his alleged gambling addiction; he writes candidly about his career at Liverpool, from Roy Evans to Gerard Houllier, and the reasons behind him leaving the club that made him as a player; and he talks about his ambitions for the England team and his new club Newcastle.

He is also opinionated about his England striking partnership with Wayne Rooney and the threat from Jermaine Defoe; his complex and at times difficult relationship with coaches such as Glenn Hoddle, Kevin Keegan and Sven-Goran Eriksson; and he has strong views on the thug culture still rife in English football.

Outside of the game, he talks openly for the first time about the death threats to him and his family, his relationship with childhood sweetheart Louise Bonsall - including her serious injury from a riding accident - and their baby Gemma as well as his passion for horse racing and betting.

Exclusive to this paperback edition, there are two new chapters covering Owen's dramatic transfer to Real Madrid, the frustrations of his first season in La Liga and the reasons for his return to England. The book will also expose the inside story of England's 2006 World Cup qualifying campaign.

Michael Owen was born in Chester in December 1979. The third youngest player to have found the net in a World Cup finals tournament, he has been voted PFA Player of the Year and BBC Sports Personality of the Year. He graduated through the Lilleshall school of excellence and has played for England at Youth, Under-18 and Under -21 levels. At senior level he has captained his country and looks set to break all goalscoring records in the coming years. He is currently enjoying a successful season at his new club Real Madrid.

GOR000841412
Michael Owen: Off the Record by Michael Owen
Michael Owen
Used - Very Good
Paperback
HarperCollins Publishers
2006-05-15
352
0002189402
9780002189408
N/A
Book picture is for illustrative purposes only, actual binding, cover or edition may vary.
This is a used book - there is no escaping the fact it has been read by someone else and it will show signs of wear and previous use. Overall we expect it to be in very good condition, but if you are not entirely satisfied please get in touch with us.