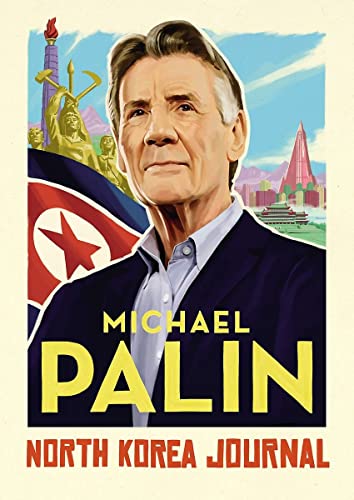 THE BOOK BEHIND THE HIT DOCUMENTARY

A glimpse of life inside the world's most secretive country, as told by Britain's best-loved travel writer.

In May 2018, former Monty Python stalwart and intrepid globetrotter Michael Palin spent two weeks in the notoriously secretive Democratic People's Republic of Korea, a cut-off land without internet or phone signal, where the countryside has barely moved beyond a centuries-old peasant economy but where the cities have gleaming skyscrapers and luxurious underground train stations. His resulting documentary for Channel 5 was widely acclaimed.

Now he shares his day-by-day diary of his visit, in which he describes not only what he saw - and his fleeting views of what the authorities didn't want him to see - but recounts the conversations he had with the country's inhabitants, talks candidly about his encounters with officialdom, and records his musings about a land wholly unlike any other he has ever visited - one that inspires fascination and fear in equal measure.

Written with Palin's trademark warmth and wit, and illustrated with beautiful colour photographs throughout, the journal offers a rare insight into the North Korea behind the headlines.

Palin expands on his Channel 5 documentary with this absorbing and beautifully illustrated day-by-day account. * Daily Mirror *
A fascinating proposition . . . [a] winning mix of genuine interest, good-humoured charm and that deceptively steely nose for humbug. * Wanderlust *
An eye-opening look at a place that doesn't figure on most travellers' bucket lists * Kirkus *
The Python's most dangerous journey yet. Palin journeyed into the heart of Kim Jong-un's repressive and secretive regime. * The Times, 50 Best Book for Autumn *
[Lifts] the veil on one of the last blind spots on the globe * Irish Independent *
The most recent - and the most extraordinary - trip was his exploration of North Korea... in his North Korea Journal... he offers fresh insight into the secretive country, which he approached with his signature openness and curiosity. * Radio Times *
Reading his account . . . one is reminded afresh of Palin's great qualities as a traveller - his curiosity, good humour, and willingness to see the best in everyone he encounters. * Telegraph *
A fascinating and humorous document * Choice Magazine *
Gem of a book * Daily Express *
It's a typically entertaining guide, combining travelogue tips with his own interesting observations * RTE Guide *
TV adventurer and Monty Python legend Michael Palin recounts his most recent travel escapades . . . the book details a world of gleaming skyscrapers, an airport with no passengers and a countryside where centuries-old traditions dominate * Best Travel Books, ShortList *
The book is full of stunning photography which shows the natural splendour and beauty of Korea. And it also affords a rare glimpse of a non-communist who is really attempting to get to the pulse of everyday life in the country. Palin has a refreshing honesty about people who we almost never get to see. * Morning Star *
His careful probing and gentle observations of a country that is at once suffocated by suppression and highly-functioning make for an eye-opening account with a level of humanity that often gets lost in the headlines. -- 8 Great books for Escapism * Luxury London *

Michael Palin has written and starred in numerous TV programmes and films, from Monty Python and Ripping Yarns to The Missionary and The Death of Stalin. He has also made several much-acclaimed travel documentaries, his journeys taking him to the North and South Poles, the Sahara Desert, the Himalayas, Eastern Europe and Brazil. His books include accounts of his journeys, novels (Hemingway's Chair and The Truth) and several volumes of diaries. From 2009 to 2012 he was president of the Royal Geographical Society, and in 2013 he was made a BAFTA fellow. He lives in London.

GOR010117405
North Korea Journal by Michael Palin
Michael Palin
Used - Like New
Hardback
Cornerstone
2019-09-17
176
178633190X
9781786331908
N/A
Book picture is for illustrative purposes only, actual binding, cover or edition may vary.
This is a used book - there is no escaping the fact it has been read by someone else and it will show signs of wear and previous use. Overall we expect it to be in very good condition, but if you are not entirely satisfied please get in touch with us.