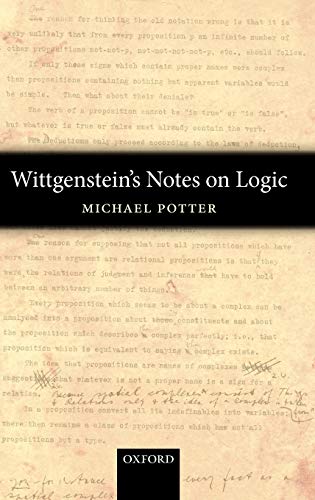 In Stock
$64.99
+10% GST
Michael Potter shows, for the first time, that Wittgenstein's early Notes on Logic are a work of philosophical and historical importance. Using a challenging blend of biography and philosophy, he draws new conclusions about the nature of the Notes, the genesis of the Tractatus, and Wittgenstein's working methods.
Good
Only 1 left

Wittgenstein's philosophical career began in 1911 when he went to Cambridge to work with Russell. He compiled the Notes on Logic two years later as a kind of summary of the work he had done so far. Russell thought that they were 'as good as anything that has ever been done in logic', but he had Wittgenstein himself to explain them to him. Without the benefit of Wittgenstein's explanations, most later scholars have preferred to treat the Notes solely as an interpretative aid in understanding the Tractatus (which draws on them for material), rather than as a philosophical work in their own right. Michael Potter unequivocally demonstrates the philosophical and historical importance of the Notes for the first time. By teasing out the meaning of key passages, he shows how many of the most important insights in the Tractatus they contain. He discusses in detail how Wittgenstein arrived at these insights by thinking through ideas he obtained from Russell and Frege. And he uses a challenging blend of biography and philosophy to illuminate the methods Wittgenstein used in his work. The book features the complete text of the Notes in a critical edition, with a detailed discussion of the circumstances in which they were compiled, leading to a new understanding of how they should be read.

Michael Potter is Reader in the Philosophy of Mathematics at Cambridge University. He is the author of Sets (OUP, 1990), Reason's Nearest Kin (OUP, 2000), Set Theory and its Philosophy (OUP, 2004), and Mathematical Knowledge (edited with Mary Leng and Alexander Paseau, OUP, 2007).

GOR009723522
Wittgenstein's Notes on Logic by Michael Potter
Michael Potter
Used - Good
Hardback
Oxford University Press
2008-12-18
336
0199215839
9780199215836
N/A
Book picture is for illustrative purposes only, actual binding, cover or edition may vary.
This is a used book - there is no escaping the fact it has been read by someone else and it will show signs of wear and previous use. Overall we expect it to be in very good condition, but if you are not entirely satisfied please get in touch with us.