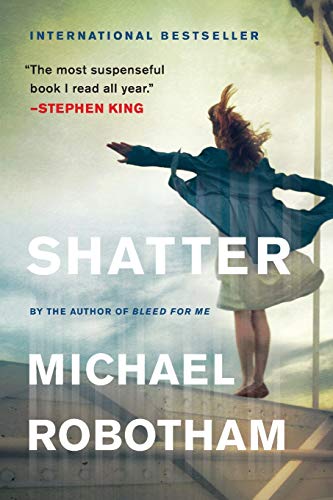 In "the most suspenseful book I read all year" (Stephen King), a psychologist faces off against a killer who destroys his victims from the inside out.
Joe O'Loughlin is in familiar territory-standing on a bridge high above a flooded gorge, trying to stop a distraught woman from jumping. "You don't understand," she whispers, and lets go. Joe is haunted by his failure to save the woman, until her teenage daughter finds him and reveals that her mother would never have committed suicide-not like that. She was terrified of heights.

What could have driven her to commit such a desperate act? Whose voice? What evil?

Having devoted his career to repairing damaged minds, Joe must now confront an adversary who tears them apart. With pitch-perfect dialogue, believable characters, and astonishingly unpredictable plot twists, Shatter is guaranteed to keep even the most avid thriller readers riveted long into the night.

Michael Robotham has been an investigative journalist in Britain, Australia and the US. One of world's most acclaimed authors of thriller fiction, he lives in Sydney with his wife and three daughters.

GOR004844685
Shatter by Michael Robotham
Michael Robotham
Joseph O'Loughlin
Used - Very Good
Paperback
Little, Brown & Company
2012-01-26
472
0316187429
9780316187428
N/A
Book picture is for illustrative purposes only, actual binding, cover or edition may vary.
This is a used book - there is no escaping the fact it has been read by someone else and it will show signs of wear and previous use. Overall we expect it to be in very good condition, but if you are not entirely satisfied please get in touch with us.