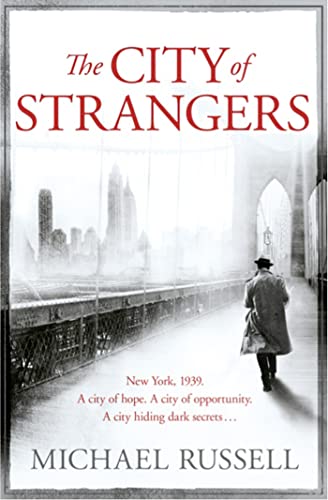 The City of Strangers
by Michael Russell

The City of Strangers Summary

The City of Strangers by Michael Russell

A brutal murder in an affluent suburb of Dublin and the unexplained death of an Irish diplomat in Manhattan...
Garda Sergeant Stefan Gillespie is sent to America to bring a killer to justice, but his mission soon becomes part of an increasingly personal struggle. A chance encounter with an old friend draws him deep into a chilling network of conspiracy, espionage and terror with disturbing connections to home. He becomes more involved than he should in an Irish woman's bid for freedom from the clutches of the Manhattan underworld, and discovers that the war that is looming in Europe is already being played out here on the streets, with deadly consequences.
In this time when people must make a stand for what they believe in, the stakes for Stefan Gillespie, and everything he holds dear, couldn't be higher.
This thrilling, elegant and hugely atmospheric novel will keep you reading late into the night.

Customer Reviews - The City of Strangers

The City of Strangers Reviews

`Complex but compelling ... utterly vivid and convincing ...Michael Russell's style is a pleasure: easy, fluent, clear, always calm and never over-heated. The result is an exciting comfort read, which sounds like a paradox but isn't' (INDEPENDENT ON SUNDAY)

`Part thriller and part historical novel, this is a blinder of a read!' (SUN)

`A great insight into a turbulent time in Dublin and Ireland, in a challenging-to-your-heartbeat kind of way' (Evening Herald)

`In action ranging from Dublin to Danzig Russell has drawn on real-life Irish characters whose decent behaviour in the face of the impending Holocaust has been sadly lost over the years. This book has triumphantly revived their reputation' (Jewish Chronicle)

`This is a sterling debut not to be rushed, but to be savoured' (www.crimesquad.com)

Michael Russell read English at Oxford before spending three years working in farming in North Devon, trying to get someone to pay him to write. He worked for Yorkshire Television as a script editor, on Emmerdale Farm, working his way up to Series Producer. He also spent several years in the Drama Department, first as Script Consultant then Producer, before leaving ITV to write full-time. He was a regular contributor to Midsommer Murders and scripted the last ever Touch of Frost which topped the ratings. He lives in Ireland with his family, where he is doing what he always wanted to do, writing novels.

GOR004844913
The City of Strangers by Michael Russell
Michael Russell
Used - Very Good
Paperback
HarperCollins Publishers
2013-11-07
496
1847563473
9781847563477
N/A
Book picture is for illustrative purposes only, actual binding, cover or edition may vary.
This is a used book - there is no escaping the fact it has been read by someone else and it will show signs of wear and previous use. Overall we expect it to be in very good condition, but if you are not entirely satisfied please get in touch with us.