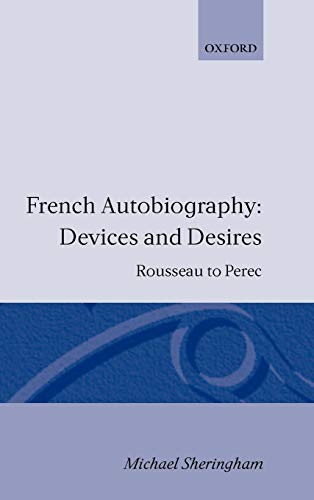 Out of Stock
$78.99
inc. GST
Autobiography has been the subject of growing critical interest in recent years. In the first full-scale study of French autobiography, Michael Sheringham uses close and sensitive readings of sixteen key French autobiographical texts by writers from Rousseau to Sarraute, Stendhal to Perec, to provide a major contribution to the discussion of the genre.
Very Good
Only 0 left

This is the first full-scale study of French autobiography. Whereas earlier critics have engaged primarily in theoretical discussion of the genre, or in analyses of individual works or authors, Michael Sheringham identifies sixteen key autobiographical texts and situates them in the context of an evolving set of challenges and problems. Informed by a sophisticated awareness of recent theoretical debates, Sheringham conceives autobiography as a distinctively open form of writing, perpetually engaged with different forms of `otherness'. Manifestations of the Other in the autobiographical process - from the reader, who incarnates other people, to ideology, against which individual truth must be pitted, to the potential otherness of memory itself - are traced through a scrutiny of the `devices and desires' at work in a range of texts from Rousseau's Confessions, to Stendhal's Vie de Henry Brulard and Sartre's Les Mots. Other writers examined include Chateaubriand, Gide, Green, Leiris, Leduc, Gorz, Barthes, Perec, and Sarraute. French Autobiography: Devices and Desires represents both the first attempt to assemble a canon in one volume and a strikingly original contribution to the theory of autobiography.

'this is a well-informed and incisively written investigation into French autobiography ... it is refreshing to find conclusions emerging from an acute analysis of a wide diversity of autobiographical practice, and a constant awareness of approaches in non-French autobiography' Times Higher Education Supplement
'Michael Sheringham's French Autobiography: Devices and desires, the first major study of its kind in English since Germaine Bree's Narcissus Absconditus (1978), builds admirably on this vigorous body of recent French autobiographical theory and practice ... an informative and far-reaching volume that should be of considerable value not only to students of French literature but to anyone interested in the intentions and trasnsactions that inform autobiography in general.' eBTimes Literary Supplement
'Michael Sheringham engages, with subtlety, complexity, and admirable clarity, all the issues that students of the intriguing but elusive genre of autobiography have been pondering for the past quarter of a century ... a thoughtful and vigorous book, as fine as any I have seen on autobiography in some years. There is a strong intelligence at work in the book calling out an equal response from its readers, a group that should include anyone interested in the state of the art, whether that art be autobiography or criticism or the project that includes both, literature itself.' James Olney, Louisiana State Universkty, L'Esprit Createur
a valuable contribution to a dynamic area of literary studies. This is a scholarly, methodical study. Each theme is introduced with a useful survey of relevant critical texts, the most helpful articles being signalled in notes. ...impressive in its breadth of knowledge, examining theories and texts from the eighteenth century to the present day. The synthesis achieved is remarkable, and the book, densely packed with ideas, requires and deserves attentive reading. * Modern Language Review *
the persistent reader will be richly rewarded...The book has something to offer all scholars interested in autobiography as well as lucid critical analyses of individual texts...His work confirms what we already knew: that the French autobiographical tradition is extraordinarily rich.