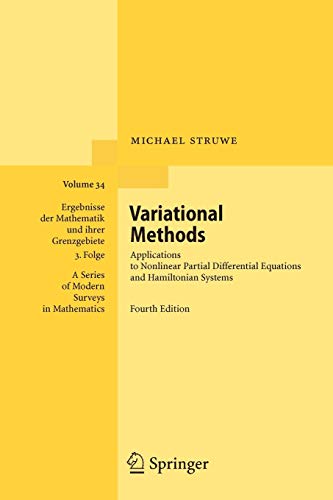 This, the fourth edition of Stuwe's book on the calculus of variations, surveys new developments in this exciting field. Recently discovered results for backward bubbling in the heat flow for harmonic maps or surfaces are discussed.

This, the fourth edition of Stuwe's book on the calculus of variations, surveys new developments in this exciting field. It also gives a concise introduction to variational methods. In particular it includes the proof for the convergence of the Yamabe flow and a detailed treatment of the phenomenon of blow-up. Recently discovered results for backward bubbling in the heat flow for harmonic maps or surfaces are discussed. A number of changes have been made throughout the text.

From the reviews of the fourth edition:

"The fourth edition of Michael Struwe's book Variational Methods: Applications to Nonlinear Partial Differential Equations and Hamiltonian Systems was published in 2008, 18 years after the first edition. ... The bibliography alone would make it a valuable reference as it contains nearly 500 references. ... Struwe's book is addressed to researchers in differential geometry and partial differential equations." (John D. Cook, MAA Online, January, 2009)

"This is the fourth edition of a standard reference work on direct methods in the calculus of variations. ... The book contains a wealth of important results that would otherwise be hard to find in one single place." (M. Kunzinger, Monatshefte fur Mathematik, Vol. 160 (4), July, 2010)

Michael Struwe is full Professor of Mathematics at ETH Zurich.

On April 1, 1986 Michael Struwe was appointed assistant professor, on October 1, 1990 associate professor and in 1993 he became full Professor of Mathematics at the ETH Zurich. From October, 2002 to September, 2004 he served as head of the ETH Mathematics Department. His research focuses on non-linear partial differential equations and the calculus of variations as well as their applications in mathematical physics and differential geometry.

In 2006 he received the Credit Suisse Award For Best Teaching.

The Direct Methods in the Calculus of Variations.- Minimax Methods.- Limit Cases of the Palais-Smale Condition.
NLS9783642093296
9783642093296
3642093299
Variational Methods: Applications to Nonlinear Partial Differential Equations and Hamiltonian Systems by Michael Struwe
Michael Struwe
Ergebnisse der Mathematik und ihrer Grenzgebiete. 3. Folge / A Series of Modern Surveys in Mathematics
New
Paperback
Springer-Verlag Berlin and Heidelberg GmbH & Co. KG
2010-10-19
302
N/A
Book picture is for illustrative purposes only, actual binding, cover or edition may vary.
This is a new book - be the first to read this copy. With untouched pages and a perfect binding, your brand new copy is ready to be opened for the first time
Trustpilot