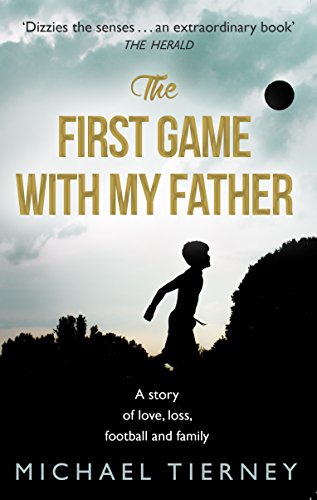 The First Game with My Father
by Michael Tierney

Used Price
$22.49
inc. GST
Free Shipping in Australia
In the early winter of 1983, a generous season for memories, Michael Tierney attended his first - and only - game with his father, John. The most intimate portrait of a father and son and how a football team unites them in an unbreakable bond, it is also the story of a city, a community, and a treasured way of life.
Reviews:
Trustpilot
Very Good Good

The First Game with My Father Summary

The First Game with My Father by Michael Tierney

In the early winter of 1983, a generous season for memories, Michael Tierney attended his first - and only - game with his father, John. For a self-employed electrician with nine children to support, this was the rarest of opportunities. Miraculously, Celtic overturned a first-leg deficit to thrash Sporting Lisbon, 5-0, with a team of home-grown talent, players that felt as one with the fans. As the years pass, that one magical evening fades in the bustle of family commitments and the constant spectre of unemployment. Then, in 2002, John Tierney has a severe stroke that renders him immobile and unable to talk. For his wife Catherine, for Michael and his five sisters and three brothers, the landscape of life would change irrevocably. But three decades later, Michael and his wheelchair-bound parent would make an emotional return to Celtic Park. The First Game with My Father is an evocative family memoir and a journey of discovery into lives that diverge, yet are knitted together by moments of sorrow and joy, and into the nature of identity, especially when tragedy renders a man voiceless. The most intimate portrait of a father and son and how a football team unites them in an unbreakable bond, it is also the story of a city, a community, and a treasured way of life.

Customer Reviews - The First Game with My Father

The First Game with My Father Reviews

"A distance of more than five years from the newspaper industry has not separated Michael Tierney from the imperative of immediately grabbing the reader by the lapels and giving the story straight and true with the concussive power of a headbutt and with a narrative that dizzies the senses... an extraordinary book." * The Herald *
"A beautiful and lyrical memoir about the transformative power of sport... wonderful style. Tierney's book adds to the canon of great sports writing, which uses sport as a way of interrogating human interaction." * Huffington Post *
"Beautifully written family memoir, set in the Catholic working-class community of Glasgow, which tells a poignant but life-affirming story of love, loss and family." * The Bookseller *
"One of the most moving stories I've ever read... I was completely blown away by it." * Paul Cuddihy, editor of Celtic View *
"So moving, I love it." * Damian Barr, author of Maggie and Me *

Michael Tierney is a multi-award winning journalist, editor and writer. He is a winner of the coveted Martha Gellhorn Prize for Journalism, the Lorenzo Natali Prize for Journalism, has twice been named Feature Writer of the Year at the prestigious British Press Awards and is a four-time winner at the Scottish Press Awards. He was a contributing editor to the Celtic Opus. As a teenager he had the opportunity to become a professional footballer. Andy Dodds, an old football coach of the author's, still swears he was the best young player he has ever seen.

GOR007311506
The First Game with My Father by Michael Tierney
Michael Tierney
Used - Very Good
Paperback
Transworld Publishers Ltd
2015-05-28
400
0552779636
9780552779630
N/A
Book picture is for illustrative purposes only, actual binding, cover or edition may vary.
This is a used book - there is no escaping the fact it has been read by someone else and it will show signs of wear and previous use. Overall we expect it to be in very good condition, but if you are not entirely satisfied please get in touch with us.