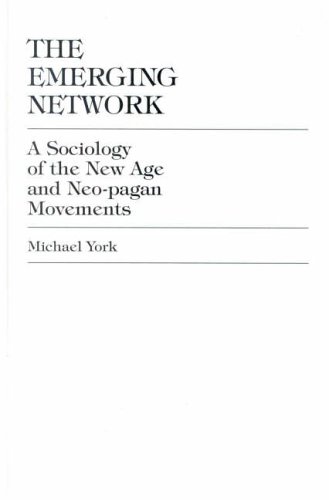 The Emerging Network
by Michael York

Out of Stock
$79.99
inc. GST
The 1980s saw the emergence of New Age and neo-paganism as major new religious movements. In this study of these movements, Michael York describes their rituals and beliefs and examines the similarities, differences and relationships between them, profiling particular groups.
Well Read
Only 0 left

The Emerging Network: A Sociology of the New Age and Neo-pagan Movements by Michael York

The 1980s saw the emergence of New Age and neo-paganism as major new religious movements. In the first book-length study of these movements, Michael York describes their rituals and beliefs and examines the similarities, differences and relationships between them. He profiles particular groups, including the Church Universal Triumphant, Nordic pagans, and the Covenant of Unitarian Pagans, and questions the adequacy of existing sociological categories for describing these largely amorphous phenomena.

the combination of empirical research, conceptual clarity, and sociological awareness makes Dr. York's book an impressive addition to the literature on the New Age and Neo-Paganism today. -- Professor James Beckford, University of Warwick
... necessary reading for all those interested in religion and secular alternatives to religion in the contemporary world. -- Dr. Peter B. Clarke, King's College, University of London
Michael York has produced a timely book which introduces us to the complicated and often confusing world of the New Age and Neo-paganism. The book contains a useful review of potentially relevant sociology of religion literature...This is a book that any sociologist of religion with the slightest interest in the spiritual and cultural innovations currently occurring in the West should read.
Once in a long while a book comes along so outstanding as to merit a "must buy" recommendation. This is such a book. If this were the only book you could have on "new religions", it would very well satisfy the need. Highly recommended! * Cultic Studies Journal *
...treatment of these groups [New Age and neo-pagan groups] is informative. ...well written. * CHOICE *

Michael York is Director of the Academy for Cultural and Educational Studies (in London and Varanasi, India) and director of the Amsterdam Center for Eurindic Studies.

GOR010242570
The Emerging Network: A Sociology of the New Age and Neo-pagan Movements by Michael York
Michael York
Used - Well Read
Hardback
Rowman & Littlefield
1995-04-19
336
0847680002
9780847680009
N/A
Book picture is for illustrative purposes only, actual binding, cover or edition may vary.
This is a used book. We do our best to provide good quality books for you to read, but there is no escaping the fact that it has been owned and read by someone else previously. Therefore it will show signs of wear and may be an ex library book.