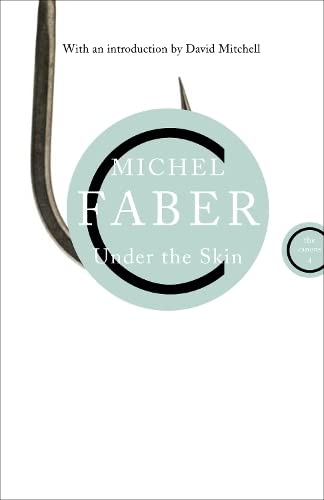 With an introduction by David Mitchell

Isserley spends most of her time driving along empty, winding Highland roads in her red Toyota. She is interested in hitchhikers - so long as they are male, well-muscled and alone. But once she has coaxed them into her car, what she does to them is truly astonishing. Meeting Isserley is only the beginning of their journey, and a gateway to a new world. Cutting across different genres, Under the Skin is a wildly inventive, bold and beautifully written book that launched Michel Faber's international career and was shortlisted for the Whitbread First Book Award. And in Isserley, Faber created one of the most memorable and singular heroines of modern times.
It'll get to you one way or another. Of that there is no doubt * * Observer * *
A wonderful book - painful, lyrical, frightening, brilliant . . . I couldn't put it down * * Kate Atkinson * *
Teases and prods the reader up a plethora of literary blind alleys before hauling them screaming towards its final, thrilling destination * * Daily Telegraph * *
This is a man who could give Conrad a run at writing the perfect sentence * * Guardian * *
. . . strange, adept, original . . . Would that more first novels were as adventurous or as funky and daring in their conception * * Independent on Sunday * *
Profound and disturbing . . . Faber writes superbly * * Sunday Times * *
Brilliantly compressed drama of threat and ambiguity . . . Recalling writers such as Jim Crace and Russell Hoban, Under the Skin, like Faber's short stories, is an extremely assured and imaginative work * * Observer * *
Under the Skin is a shocking and fantastical take on modern humanity * * The Week * *
One measure of a book is its stickability, its ability to remain in the mind long after being read. Michel Faber's Under the Skin passes this test with ease, or should that be unease? Faber builds a credible thriller on what seems the shakiest of premises . . . Its triumph, however, is that it plays on the mind long after a first reading. It is the best first novel of the year and a worthy successor to Faber's short stories * * Herald * *
Astonishingly, this is Michel Faber's first novel. It is audacious, fascinating, repellent and quite unlike anything I have ever read * * Mail on Sunday * *
Edgy, accomplished debut . . . To describe the bizarre scenario behind this novel would make it sound absurd but in Michel Faber's hands it is a compelling and darkly disorientating tale. Told in sparse, often beautiful prose, Under the Skin defies genre, swerving from parable to science fiction and questioning what makes us human, how we connect to each other, and how we define and treat the 'other'. A refreshing reminder of how good fiction can make our own world seem alien * * Daily Mail * *
The fantastic is so nicely played against the day-to-day that one feels the strangeness of both . . . A remarkable novel * * New York Fish * *
Under the Skin tattoos the memory with an unholy trinity of hitch-hikers, the Scottish highlands and the extraterrestrial meat-packing industry. Wonderful, grisly and beyond bonkers -- David Mitchell, author of CLOUD ATLAS * * The Week * *
Michel Faber has written eight books. In addition to the Whitbread-shortlisted Under the Skin, he is the author of the highly acclaimed The Crimson Petal and the White, The Fire Gospel and The Fahrenheit Twins. He has also written two novellas, The Hundred and Ninety-Nine Steps and The Courage Consort, and has won several short-story awards, including the Neil Gunn, Ian St James and Macallan. Born in Holland, brought up in Australia, he now lives in the Scottish Highlands.
GOR003344804
Under The Skin by Michel Faber
Michel Faber
Canons
Used - Very Good
Paperback
Canongate Books Ltd
2011-08-18
320
0857861778
9780857861771
Winner of Whitbread First Novel Award 2000 (UK)
Book picture is for illustrative purposes only, actual binding, cover or edition may vary.
This is a used book - there is no escaping the fact it has been read by someone else and it will show signs of wear and previous use. Overall we expect it to be in very good condition, but if you are not entirely satisfied please get in touch with us
Trustpilot