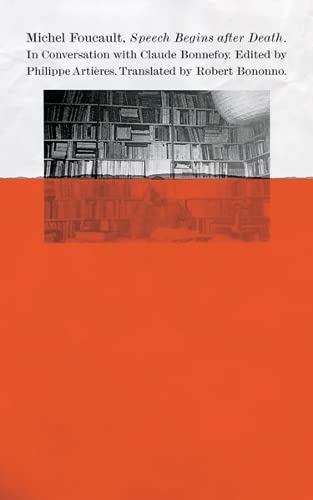 Speech Begins after Death is a transcript of critic Claude Bonnefoy's interview with Michel Foucault in which he reflects on his approach to the written word throughout his life, from his school days to his discovery of the pleasure of writing. Never before published in English, this is one of Foucault's most personal statements about his life and writing.

In 1968, Michel Foucault agreed to a series of interviews with critic Claude Bonnefoy, which were to be published in book form. Bonnefoy wanted a dialogue with Foucault about his relationship to writing rather than about the content of his books. The project was abandoned, but a transcript of the initial interview survived and is now being published for the first time in English. In this brief and lively exchange, Foucault reflects on how he approached the written word throughout his life, from his school days to his discovery of the pleasure of writing.

Wide ranging, characteristically insightful, and unexpectedly autobiographical, the discussion is revelatory of Foucault's intellectual development, his aims as a writer, his clinical methodology ("let's say I'm a diagnostician"), and his interest in other authors, including Raymond Roussel and Antonin Artaud. Foucault discloses, in ways he never had previously, details about his home life, his family history, and the profound sense of obligation he feels to the act of writing. In his Introduction, Philippe Artieres investigates Foucault's engagement in various forms of oral discourse-lectures, speeches, debates, press conferences, and interviews-and their place in his work.

Speech Begins after Death shows Foucault adopting a new language, an innovative autobiographical communication that is neither conversation nor monologue, and is one of his most personal statements about his life and writing.

Michel Foucault (1926-1984) was a French historian and philosopher associated with the structuralist and poststructuralist movements. He is often considered the most influential social theorist of the second half of the twentieth century, not only in philosophy but in a wide range of disciplines in the humanities and social sciences. Among his most notable books are Madness and Civilization, Discipline and Punish, and The History of Sexuality.

GOR010221498
Speech Begins after Death by Michel Foucault
Michel Foucault
Used - Very Good
Hardback
University of Minnesota Press
2013-03-01
96
0816683204
9780816683208
N/A
Book picture is for illustrative purposes only, actual binding, cover or edition may vary.
This is a used book - there is no escaping the fact it has been read by someone else and it will show signs of wear and previous use. Overall we expect it to be in very good condition, but if you are not entirely satisfied please get in touch with us.