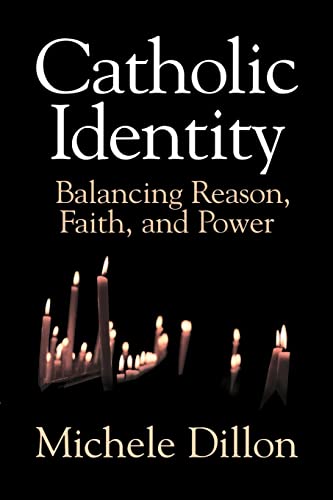 In Stock
56,99 $
inc. GST
Michele Dillon, drawing upon in-depth interviews with Catholics who are openly gay or lesbian, advocates of women's ordination, and pro-choice, investigates why and how pro-change Catholics continue to remain actively involved with the Church, despite their rejection of the Vatican's teaching on sexuality and gender.
Very Good
Only 1 left

It has been well documented that American Catholics tend to be Catholics on their own terms, or choose to remain Catholic while selectively embracing official Church doctrine. But why do Catholics who disagree with official Church teachings on major issues such as homosexuality, women's ordination, or abortion, and are thus institutionally marginalized, choose to remain Catholic? Why do they stay, when the cost of staying and being stigmatized would seem to be greater than the benefits they might gain from switching to religious groups whose doctrines would validate their beliefs on these issues? Michele Dillon, drawing upon in-depth interviews with Catholics who are openly gay or lesbian, advocates of women's ordination, and pro-choice, investigates why and how pro-change Catholics continue to remain actively involved with the Church, despite their rejection of the Vatican's teaching on sexuality and gender.

'How do Catholics cope with the dramatic and traumatic changes in their Church? How do they manage to sustain a Catholic identity while at the same time dissenting from their hierarchy? Do they redefine their faith in order to continue to be Catholic? Professor Dillon's response to these questions presents a more subtle and sophisticated model of Catholicism than commonly perceived. Her work is a major contribution both to the sociology of religion and to the understanding of American religion.' Andrew M. Greeley, University of Chicago
'This scholarly yet lively and populist study shows how and why progressive Catholics are deeply informed by tradition and strongly committed to Church membership, Dillon brilliantly combines sociology, theology, and a large life of Catholic experience to argue that the Vatican too created and engaged safe communities in which diversity need not cause fragmentations. This book will make invaluable, provocative reading for anyone trying to take stock of the contemporary North American Church.' Lisa Cahill, Boston College
'With both richness of detail and theoretical flourish, Dillon shows us how these 'pro-change' Catholics are re-making Catholic identity - in spite of the Church and yet within the Church. And in the process she also shows us some very important things about the nature of community and identity in a world of valued differences.' Nancy Ammerman, Hartford Seminary

1. Pro-change Catholics: forging community out of diversity; 2. Doctrinal change in the Catholic Church; 3. Official Church teaching on homosexuality, women's ordination, abortion, and the role of the theologian; 4. Pro-change groups in the Catholic Church: dignity, the women's ordination conference, and Catholics for a free choice; 5. Gay and lesbian Catholics: 'owning the identity differently'; 6. Using doctrine to critique doctrine; 7. Pluralism in community; 8. Reasoned theology: legitimating emancipatory possibilities; 9. The challenges of difference.

GOR006339929
Catholic Identity: Balancing Reason, Faith, and Power by Michele Dillon (Yale University, Connecticut)
Michele Dillon (Yale University, Connecticut)
Used - Very Good
Paperback
Cambridge University Press
1999-08-13
300
052163959X
9780521639590
N/A
Book picture is for illustrative purposes only, actual binding, cover or edition may vary.
This is a used book - there is no escaping the fact it has been read by someone else and it will show signs of wear and previous use. Overall we expect it to be in very good condition, but if you are not entirely satisfied please get in touch with us.