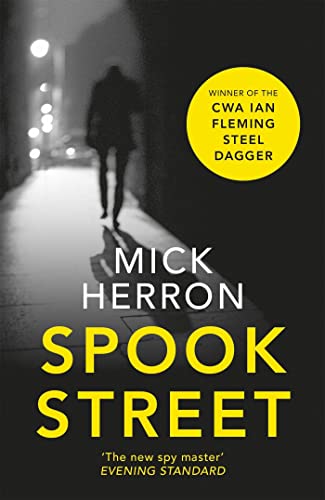 'Mick Herron is an incredible writer and if you haven't read him yet, you NEED to' Mark Billingham

Never outlive your ability to survive a fight.

Twenty years retired, David Cartwright can still spot when the stoats are on his trail.

Jackson Lamb worked with Cartwright back in the day. He knows better than most that this is no vulnerable old man. 'Nasty old spook with blood on his hands' would be a more accurate description.

'The old bastard' has raised his grandson with a head full of guts and glory. But far from joining the myths and legends of Spook Street, River Cartwright is consigned to Lamb's team of pen-pushing no-hopers at Slough House.

So it's Lamb they call to identify the body when Cartwright's panic button raises the alarm at Service HQ.

And Lamb who will do whatever he thinks necessary, to protect an agent in peril . . .

A terrific spy novel: sublime dialogue, frictionless plotting * Ian Rankin *
Immensely satisfying and utterly brilliant * Sarah Hilary *
Mick Herron is an incredible writer and if you haven't read him yet, you NEED to. I read the Jackson Lamb books one after the other and am already desperate for the next one. They are smart, darkly comic and hugely addictive * Mark Billingham *
A captivating series where the intelligence services' misfits and screw-ups become the useful tools of Herron's quite magnificent creation, Jackson Lamb * Christopher Brookmyre *
I love Mick Herron's books more than is decent. Hands down my favourite crime series of the decade . . . Spook Street is a superb novel - fast-paced, original, witty and completely satisfying on every level. I just can't get enough of this brilliant series * Antonia Hodgson *
In Spook Street Mick Herron returns to the wonderful fallen spies of MI5 in a series that is fast becoming a classic * Daily Express *
The dialogue crackles. Herron is a master of timing, word by word, sentence by sentence. His language creates its own world, with streaks of satire and loss that prevent it from becoming too comfortable. Give yourself a treat and hurry on down to Spook Street * The Spectator *
It's all sheer fun. Herron is spy fiction's great humorist, mixing absurd situations with sparklingly funny dialogue and elegant, witty prose * The Times *
Slough House provides the hub for Mick Herron's Jackson Lamb spy novels, of which Spook Street is the fourth, a series that is by some distance the most impressive new body of work in spy fiction * Irish Times *
Mick Herron's outstanding series is extremely funny * Daily Telegraph *
It's not often a reviewer can say, "You've never read anything quite like this" but it's a safe encomium to use in the case of Mick Herron. The author's idiosyncratic writing is unique in his genre: the spycraft of le Carre refracted through the blackly comic vision of Joseph Heller's Catch-22 * Financial Times *
Herron's series of novels about a group of deadbeat spies - or 'slow horses', in spook parlance - has been hailed as the most exciting thing to hit the genre since George Smiley hung up his mackintosh * Mail on Sunday *
Spook Street is written with a wry, sardonic wit that will make you laugh out loud as you are taken on a gripping thrill ride * Daily Express *
The new spy master * Evening Standard *
Mick Herron's Spook Street began with an atrocity targeted at teenagers, which seemed horribly prescient come the Manchester Arena attack in May. But it's these discomfiting dips into the real world that give Herron's entertaining series about incompetent MI5 rejects its depth * Daily Telegraph, Crime Books of the Year *
The long and enduring power of Le Carre leaves British espionage fiction a cramped space for newcomers. Mick Herron has carved out his own distinctive territory . . . Chief cowboy of the slow horses, Jackson Lamb, whose vulgar hedonism would be enough to make Falstaff look like Philip Hammond, is becoming one of crime fiction's great characters * Mark Lawson, Guardian, Crime Book of the Year *
This is irresistible writing suggesting a lovechild of le Carre and Joseph Heller's Catch-22: ironclad storytelling and off-kilter humour * Financial Times, Books of the Year *
This fourth in Herron's series of novels about Slough House, the department for disgraced spies, combines a terrorist attack, the murder of an old spymaster, and a mysterious fire to create a brilliantly plotted - and witty - addition * Mail on Sunday, Books of the Year *
A modern masterpiece * Irish Times, Books of the Year *
The lavishly loathsome Jackson Lamb oversees the action with all the finesse of a shark in a swimming pool * Metro, Crime Novel of the Year *

GOR008661244
Spook Street: Jackson Lamb Thriller 4 by Mick Herron
Mick Herron
Jackson Lamb Thriller
Used - Very Good
Paperback
John Murray Press
2017-09-07
352
1473621291
9781473621299
Winner of CWA Daggers: Steel 2017 (UK) Short-listed for CWA Goldsboro Gold Dagger 2017 (UK) Short-listed for Theakston Old Peculiar Crime Novel of the Year 2018 (UK)
Book picture is for illustrative purposes only, actual binding, cover or edition may vary.
This is a used book - there is no escaping the fact it has been read by someone else and it will show signs of wear and previous use. Overall we expect it to be in very good condition, but if you are not entirely satisfied please get in touch with us.