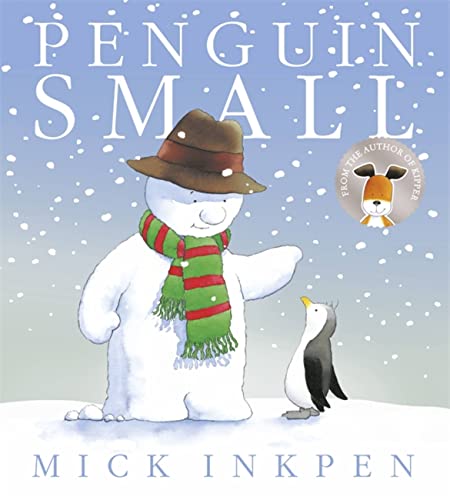 Used Price
$23.99
inc. GST
Free Shipping in Australia
A new edition of the story of the last North Pole penguin, told by the master-storyteller Mick Inkpen, creator of Kipper and Wibbly Pig.
Reviews:
Trustpilot
Like New

Penguin Small is a classic story by Mick Inkpen with a surprise giant fold-out page. It tells the story of the last North Pole penguin, who as it turns out was also the smallest penguin! He wants to join his friends in the South Pole, but he's afraid of the water. If only penguins could fly...

Penguin Small is a classic story with giant fold out pages, and as ever, vintage Inkpen illustrations for a fabulous story which explains why there are no penguins at the North Pole!

Mick Inkpen has won the British Book Award, the Children's Book Award and been shortlisted for both the Kate Greenway Medal and the Nestle Prize. He is consistently in the Top Ten most borrowed children's authors from public libraries.

More magical, micheivous storytelling from Mick Inkpen * Express & Echo (Exeter) *
Every young child will relate to this vulnerable little penguin who gets into all sorts of trouble, but manages to come through in the end. A book for survivors! * Christian Family *
Mick Inkpen has somehow turned a simple story into a great adventure, alternately funny and frightening * The Independent *
Enthralling * Rochdale Observer *
Besides being a lovely story which children will adore, Penguin Small is brimming with great illustrations ... Pure magic * Chronicle & Echo *
Full of optimism, light and adventure * The Guardian *

A tale of a penguin who escapes the wrath of angry polar bears with the help of snowman who never melts and a wise and wondrous creature called a Neverwasanocerous.

In Five of the best animal books, selected by Cressida Cowell

Mick Inkpen has been a bestselling children's author for over 25 years. He is one of today's most popular picture book author/illustrators and the famous creator of both Kipper and Wibbly Pig. Mick has won the Children's Book Award for Threadbear and the British Book Award twice, for Penguin Small and Lullabyhullaballoo. Kipper won a BAFTA for Best Animated Film.

GOR011039262
Penguin Small by Mick Inkpen
Mick Inkpen
Used - Like New
Paperback
Hachette Children's Group
2015-10-01
32
1444918214
9781444918212
N/A
Book picture is for illustrative purposes only, actual binding, cover or edition may vary.
The book has been read, but looks new. The book cover has no visible wear, and the dust jacket is included if applicable. No missing or damaged pages, no tears, possible very minimal creasing, no underlining or highlighting of text, and no writing in the margins.