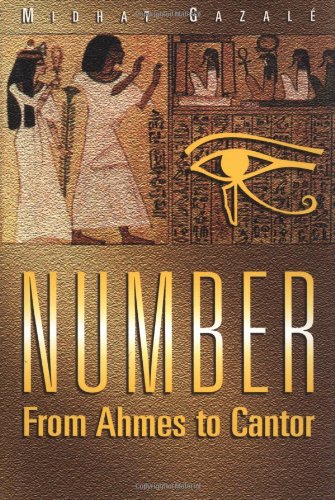 In Stock
$24.49
inc. GST
This text takes the reader on a journey from the ancient worlds of the Egyptians, the Mesopotamians, the Mayas, the Greeks and the Hindus, up to the Arab invasion of Europe and the Renaissance. It introduces some of the most fascinating and ingenious characters in mathematical history.
Very Good
Only 2 left

We might take numbers and counting for granted, but we shouldn't. Our number literacy rests upon centuries of human effort, punctuated here and there by strokes of genius. In his successor and companion volume to Gnomon: From Pharaohs to Fractals, Midhat Gazale takes us on a journey from the ancient worlds of the Egyptians, the Mesopotamians, the Mayas, the Greeks, the Hindus, up to the Arab invasion of Europe and the Renaissance. Our guide introduces us to some of the most fascinating and ingenious characters in mathematical history, from Ahmes the Egyptian scribe (whose efforts helped preserve some of the mathematical secrets of the architects of the pyramids) through the modern era of Georg Cantor (the great nineteenth-century inventor of transfinite numbers). As he deftly blends together history, mathematics, and even some computer science in his characteristically compelling style, we discover the fundamental notions underlying the acquisition and recording of "number," and what "number" truly means. Gazale tackles questions that will stimulate math enthusiasts in a highly accessible and inviting manner. What is a natural number? Are the decimal and binary systems the only legitimate ones? Did the Pythagorean theorem and the discovery of the unspeakable irrationals cost the unfortunate mathematician Hippasus his life? What was the Ladder of Theodorus of Cyrene and how did the ancient Greeks calculate square roots with such extraordinary proficiency? An original generalization of Euler's theorem is offered that explains the pattern of rational number representations. Later on, the field of Continued Fractions paves the way for another original contribution by Gazale, that of cleavages, which sheds light on the mysterious nature of irrational numbers as it beautifully illustrates Dedekind's famous Schnitt. In the end the author introduces us to the Hilbert Hotel with its infinite number of rooms, guests, and an infinite number of people waiting to check in, where he sets the debate between Aristotle and Cantor about the true nature of infinity. This abundantly illustrated book, remarkable for its coherency and simplicity, will fascinate all those who have an interest in the world of numbers. Number will be indispensable for all those who enjoy mathematical recreations and puzzles, and for those who delight in numeracy.

"One of Choice's Outstanding Academic Titles for 2000"
"Winner of the 2000 Award for Best Professional/Scholarly Book in Mathematics and Statistics, Association of American Publishers"

Midhat Gazale is an international telecommunications and space consultant and Visiting Professor of Telecommunications and Computer Management at the University of Paris IX. He has served as President of AT&T-France, as Chairman of the Board for Sperry-France and for International Computers-France, and as an executive and research scientist for other major companies. He was made Chevalier dans l'Ordre National du Merite in 1981.

GOR002929114
Number: From Ahmes to Cantor by Midhat Gazale
Midhat Gazale
Used - Very Good
Hardback
Princeton University Press
2000-03-13
272
069100515X
9780691005157
Commended for Choice Magazine Outstanding Reference/Academic Book Award 2000
Book picture is for illustrative purposes only, actual binding, cover or edition may vary.
This is a used book - there is no escaping the fact it has been read by someone else and it will show signs of wear and previous use. Overall we expect it to be in very good condition, but if you are not entirely satisfied please get in touch with us.